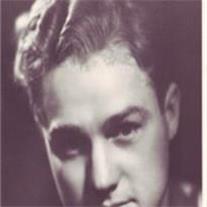 Robert James Salmon was born October 1, 1923 in Salt Lake City, Utah, to Lorenzo Snow Salmon and Helen Jane Hauerbach. He returned to his Heavenly Father on Oct. 20, 2009 in Tempe, Arizona. He served with distinction in the United States Army Infantry in the Pacific Theatre during World War II. He is survived by his loving wife of 63 years, Gloria Bolette Aagard, and five of his six children, Stephen C. Salmon, Dana K. (Salmon) Spens, Robert O. Salmon, Scott A. Salmon and former congressman Matthew J. Salmon. He was preceded in death by his oldest son Jonathan R. Salmon. Bob and Gloria have 24 grandchildren, 56 great-grandchildren and 5 great-great grandchildren. His family was his greatest treasure. He took great pride in his career of 33 years with Mountain Bell, retiring as Sr. Division Manager. He was a past president of the Telephone Pioneers of America in which he was active at the time of his passing. He was especially pleased to have met the President of the United States and to have received a gift in honor of his service to his country. Next to serving his family and friends, his greatest joy was serving with his beloved wife as a temple worker in the LDS Mesa Arizona Temple. Visitation will take place Friday, Oct. 23, from 6-8 PM at Bunker’s Garden Chapel, 33 N. Centennial Way in Mesa. Services will be held at the LDS Stake Center located at 2300 W. Javelina in Mesa on Saturday, Oct. 24, 2009 at 10:00 AM.