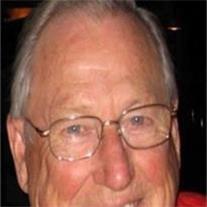 Robert (Bob) Clinton Haden, 89, of Mesa, Arizona, passed away on April 16, 2013 in Mesa, Arizona. Robert was born in Graham, Texas to Ted and Viola Haden on September 16, 1923. He attended Texas A&M and the University of Texas. Robert then entered the banking business ultimately becoming the President of First Citizens Bank in Dallas, Texas and then First Security Bank in Mesa, Arizona. He also was President of the Arizona Bankers Association. After a distinguished 22 year career in banking, receiving several Certificates of Merit from the American Institute of Banking, Robert turned to commercial real estate in 1968 where he was actively engaged in all aspects of commercial real estate brokerage, investment analysis, and appraising. Robert one of the “Greatest Generation