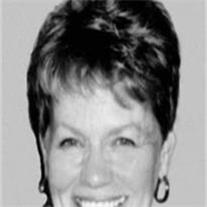 Rita Rich Westover. After a courageous battle with cancer, Rita was called home to be with her Father in Heaven on March 27, 2010. Born Aug 18th, 1947 to Gail and Emily Williams of Jerome, Idaho, her formative years were spent on the family dairy farm where she learned to love nature and value hard work. In 1970, she graduated from Brigham Young University, and shortly thereafter fell in love and married her eternal companion, the late F. Brent Rich, in the Salt Lake City LDS Temple. They settled in Eugene, Oregon, where they raised their five children and actively served in the community and church.

In 2002, Rita married her second great love husband, James H. Westover, of Phoenix, Arizona. During their time together, they were privileged to serve together as LDS missionaries in the Florence, Oregon area. There, as in every moment of her life, Rita’s cheerful smile and personality touched the lives of everyone she met.

Charity was Rita’s most distinguishing characteristic. Her greatest joy in life was serving those she loved, and she loved everyone. Rita is survived by her husband, mother, 5 siblings, 5 children and spouses, 5 stepchildren, and 23 grandchildren.

Visitation will be Tuesday, March 30, 2010 from 6-8 PM at the LDS Glen Lakes Ward chapel, 8840 North 61st Ave, Glendale, AZ. Funeral services will be held at 11 AM with a visitation at 10 AM on Wednesday, March 31st, at the same location. Arrangements by Bunker’s Garden Chapel.