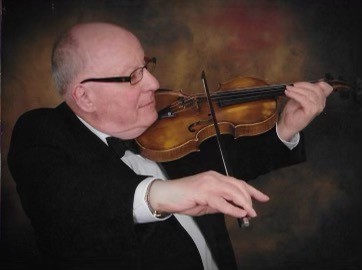 Richard was born in Chicago, Illinois in 1932. He attended Whittier Elementary School and Oak Park/River Forest High School in Oak Park, Illinois. He started playing violin at age 5 and studied with the famed violinist and composer George Perlman. He was the first student to enroll simultaneously in both the University of Rochester and the Eastman School of Music, and he received degrees from both institutions in 1955.

After graduating from college, Richard served as a Navy Ensign and sailed all over the world.

Returning to Chicago, he played violin professionally in the Grant Park Orchestra and the Lyric Opera Orchestra. He decided to become an attorney as well as a musician, and he received his Juris Doctor from John Marshall Law School in 1973, at age 41. He used to joke that his orchestra colleagues called him “the lawyer” and his attorney friends called him “the violinist.”

He met Penny Wagner on May 2, 1986 and they became life partners. In 1994 they moved to Mesa, Arizona where Richard joined the Arizona Opera orchestra and the Symphony of the Southwest, returning to Chicago in the summers to play in the Grant Park Orchestra. Penny and Richard bought a 4-wheel-drive car and explored the back roads of Arizona, New Mexico, and Utah. Until recently, Richard continued his law practice, and he played in the 2021-22 season of the Arizona Opera at age 89. He was known for wearing bow ties and telling jokes and elaborate stories to everyone he met, including total strangers. He loved to travel with his family and visited Europe many times, and went on cruises to Alaska and South America.

He is preceded in death by his brothers Sinclair and Gerald Hoffman; stepson Scott Wagner; and step-grandson Andre Wagner. He is survived by his beloved life partner Penny Wagner; daughters Beatrix Hoffman and Monalise Hoffman Littleton; grandsons Casey Yarak and Beckett Littleton; great-grandchildren Jackson and Caden Wagner, and Brett, Summer,  and Tyson Ballard. Interment is at Mesa City Cemetery. In lieu of flowers, please send contributions in his honor to the Arizona Opera or Symphony of the Southwest.