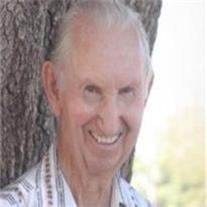 Richard E. Durfee, 76, of Mesa, was called home on October 15, 2013. He was born in Salt Lake City, on May 19th, 1937, to the late Fahy Martin and Ethel Cropper Durfee. He married Joyce Bateman on June 28th, 1956. Richard lived in Utah and Idaho until he moved his family to Mesa in 1968. The focus of his life was his family, faith, scouting and music. He served as a scout leader and trainer for his whole life. He served on many Woodbadge courses, and also as a Course Director. He received numerous scouting awards including the Silver Beaver, Award of Merit, Scout Family of the Year, the Ben Heywood Award, and others. He played the trumpet and ukelele and had a beautiful tenor voice. In 1994, Joyce passed away and Richard married Marilyn Sparks. Richard is survived by his wife of 19 years, Marilyn, and his 12 children: Rick (Janel), Roxanne Coleman (Doug), Vaughan (Diane), Russell (Karen), Dale (Kathy), Suzette Done (Craig), Ginger Adams (Frank), Jon (Kari), Jenni Brimley (Merrill), Joyce Judd (Justen), Elizabeth Curtis (Brian), Rebecca Young (Ryan) and Marilyn’s 5 children: Kevin Sparks (Kirstan), Andrew Sparks (Annaliza), David Sparks (Mandy), Robert Sparks (Holly), Melina Crosby (Jonathan), and their combined 96 grandchildren (with 12 spouses), and 22 great grandchildren for a total of 164 descendants. Richard was versatile and dedicated in working hard to provide for his family over the years as a farmer, book binder, salesman, temple security guard, and locksmith. Richard Durfee was a kind and loving husband, father, friend, grandfather, and great grandfather — he will be missed by all who knew him! Like his mentor, Baden Powell, he left this world better than he found it and has gone home! Visitation will be Friday, October 18, 2013 from 6-8 PM at Bunker’s Garden Chapel, 33 N. Centennial Way, Mesa 85201. Funeral services are Saturday, October 19, 2013 at 11 AM, preceded by a visitation at 10 AM at the LDS South Stake Center, 24th Street and Pueblo, Mesa, 85204. In lieu of flowers, the family requests that we all “Do a Good Turn Daily” and/or contribute to the Durfee Scout Foundation at 1423 S. Higley Road, Suite 127, Mesa, AZ 85206 – contact melodie.durfee@gmail.com or 480-505-6226 for more information.