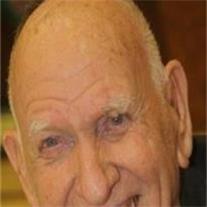 Richard D. Sabin, 91, our beloved husband, father, grandfather and brother, passed away March 7, 2013 in Mesa, AZ. He was born December 15, 1921 in Gilbert, AZ. He is survived by his eternal companion of 61 years Louise Sabin (Rhoton), children, sons, Dennis (Nada), Keith (Jane), Craig (Sandy), Dale (Nancy), John, Andy (Terri), daughter Jennie (Michael) Wood, and sister Helen Lamoreaux. He enjoyed his 25 grandchildren and 12 great grandchildren. He was an army veteran of WWII. He served in the Northern States mission. He was very active with the sports program in his church. He retired from the USPS as a station manager in 1983 after 32 years of service. He and his wife served several LDS missions. A visitation with the family will be held Tuesday, March 12, from 6-8 PM at Bunker’s Garden Chapel, 33 N. Centennial Way in Mesa, AZ. Services will be held Wednesday, March 13, at 10 AM, preceded by a visitation at 9 AM at the LDS Lazona Building, 1345 E. University, Mesa, AZ.