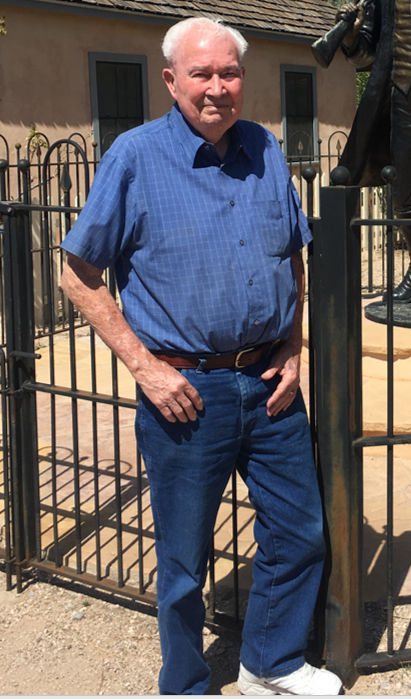 Richard B. Harmon, 92, a native of Mesa who never left, passed away peacefully on June 10, 2021.  He enjoyed a long and happy life filled with family, friends and numerous activities, both in the outdoors (hunting, camping, four-wheeling, flying and driving around the country) and in The Church of Jesus Christ of Latter-day Saints. He was born on January 6, 1929 and graduated from Mesa High School in 1946. Upon graduation he followed his father into the Movie Projectionist field, where he spent the next 35 years running the movie projectors at the Mesa, Nile, Azteca, Bethany West and University Twin Theaters as well as the Pioneer Drive-in. In 1980 he changed careers and spent the next 14 years as the Facilities Manager at Rhodes Junior High in Mesa until he retired in 1994.  Then, along with his wife Dorothy, brother Eddie and his wife Kay, the Harmons enjoyed driving to and visiting every state in the union except Hawaii, including three drives to Alaska.

A Viewing will be held from 6 – 8 pm this Friday at The Church of Jesus Christ of Latter-day Saints, Stake Center at 1010 S. Recker Rd in Gilbert.  Funeral Services will be held at 9 am this Saturday, June 19th, at the same building. Interment will follow at the City of Mesa Cemetery.