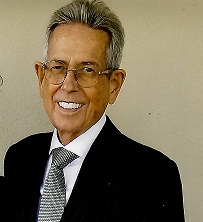 *Those attending the services to honor Richard will be required to wear a facemask and adhere to physical distancing guidelines at the mandate of the Governor and Mayor.

Services on Saturday can be viewed via live broadcast at the following link: https://youtu.be/JWFZCeBri9s

Richard Bennion Johnson, 79, passed away on Saturday, August 08, of an extended illness. Richard was born on October 19, 1940 in Murray, Utah to Rolland and Ruth Johnson. He grew up on his parent’s dairy farm along with his older brother, Sherman, and younger brother, Ronald. It was there that Richard developed a strong work ethic.

Richard excelled throughout his school years. He graduated from Utah State and then the University of Utah, earning his juris doctorate degree. He moved to Arizona to begin his law career. He needed to establish Arizona residency, so he used that year serving as a law clerk for Chief Justice Jessie Udall, of the Federal Supreme Court in Arizona. He then joined a large law firm in Phoenix and after working there 10 years, he opened his own practice in Tempe.

Richard was an active member of The Church of Jesus Christ of Latter-day Saints and served in many ward and stake capacities. He cherished his associations and friendships he developed through that service. Richard had the opportunity to serve two missions for his church. The first as a young man in the Northern States Mission, and the second with his wife Carol, in the New York South Mission.

A viewing will be held at Bunkers Garden Chapel on Friday, August 14 from 6-8 PM. The funeral will be at the same location on Saturday, August 15 at 11:00am. The service will be streamed ( Check back here for the link.)