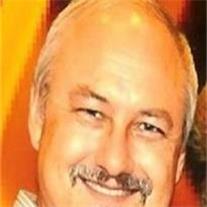 Born and raised in Colorado –Rick loved the outdoors – fishing the beaver damns, camping and exploring places like the mine in the mountains of Marble, Colorado. Though he was not much of a water man or cold temperature man; he was very warm-hearted and had a wonderful sense of humor.

After graduating in 1981 from Pomona High School, he attended the Colorado School of Mines and was awarded his Bachelors of Science Degree in Metallurgical Engineering in 1986. Later, he received his Masters Degree in Material Science from Case Western Reserve University and his MBA from the University of Phoenix.

His life was filled with family and friends. He was an avid online computer gamer, and an extreme gun and sports car enthusiast. He was always an animal lover and all the animals loved him, no matter how much he tormented them.

He married his high school sweetheart, Amy Elwell in 1985 and remained married for 27 happy and wonderful years. They shared their life with two beautiful amazing daughters, who he was very proud of.

Rick will be missed by all and remembered by many. His big heart, bright smile and contagious laugh will remain in our hearts forever.