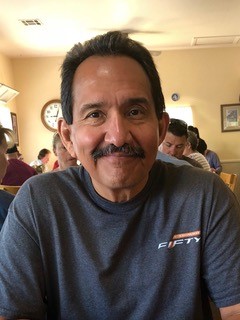 Raymond Torrez Jr. was unexpectedly called to Heaven in the early morning hours of August 5, 2020, in Phoenix, Arizona.  In addition to being welcomed home by his Heavenly Father, surely Ray’s earthly father, Raymond Torrez Sr., was there to welcome him by saying, “What took you so long, son?”

Ray, known to his family as, “Sonny” leaves behind a very large family that will forever feel this void.  Ray and his wife, Tracie, recently celebrated 12 years of marriage. In addition to Tracie, Ray is survived by his two sons, Raymond Torrez III (Candice) and Anthony Torrez (Stephanie); and his stepchildren, Andy Powell (Alissa) and Kim Gates (Brent).  Ray had 11 grandchildren and step-grandchildren ranging in age from 9 to 21: Zech, Destiny, and  AJ Torrez; Raymond Torrez IV and Derek Torrez; Natalee and Rachel Gates; Chad and Aaleyah Powell; and Kayla and Megan Bright.  Ray also leaves behind his mother, Grace Torrez; brother, David Torrez; sister, Barb Torrez; as well as many, aunts, uncles, nieces, nephews, & cousins.

Ray was born in Denver, CO on August 9, 1957.  He was just 62 when God called him home. He graduated from Alameda High School (1975) and Colorado Christian University (1998). Ray joined the US Navy with his best friend, Kenny, on the “Buddy Program” right after high school. After the military, Ray began working as a barber alongside his father, Ray Sr., in his father’s barber shops. Ray’s law enforcement career began in 1986 with the Arapahoe County Sheriff’s Office.  Ray had a very diverse career with the Sheriff’s office and looked forward to every move, promotion, and assignment. To name just a few, assignments included Warrants Investigator, Agent with South Metro Drug Task Force, Warrants Supervisor, Investigations Division Manager, Canine Commander, and his favorite; Patrol Watch Commander. Ray retired as a Patrol Lieutenant in 2010 after 24 years of service. Ray loved being a cop and always said that he couldn’t believe he got paid to do something that was so much fun.

After “retiring”, Ray’s passion for law enforcement continued by becoming a School Security Officer at Falcon Creek Middle School in Aurora, CO.  Ray left that job only because he missed “working the streets”. He was hired on as a patrol deputy with the Douglas County Sheriff’s Office.  Ray’s last job before officially retiring and moving to Arizona was a Parole Officer with the Colorado State Department of Corrections.

Ray and Tracie moved to Mesa, AZ in 2016 for health reasons.  Leaving friends and family behind in Colorado was made easier with an endless stream of visits from family.  Many priceless memories were made during those visits.

Ray was an outgoing person and communicated effortlessly with anyone regardless of who they were. Whether it was a prisoner he was extraditing back to Colorado or a church member he was sitting next to,  Ray treated everyone with respect. Ray made friends easily and mentored many along the way. While in Arizona, Ray established close relationships with buddies he met at the gym. He had many interests but at the top would have been his beloved Denver Broncos, attending Sturgis Motorcycle Rallies, and riding his Harley Davidson motorcycle. Some of Ray’s happiest times were riding with Tracie as they explored Arizona from the seats of their Harleys.

At the time of his passing, Ray was a volunteer with the Mesa Arizona Police Department, and a Membership Officer with the East Valley HOG Motorcycle group.  Ray and Tracie attended CCV, Christ Church of the Valley.

A Celebration of Ray’s Life will be held in Aurora, CO with internment at Fort Logan National Cemetery in Littleton, CO.

Contributions can be made in Ray’s honor to CCV, East Valley Fund, Christ Church of the Valley.  https://pushpay.com/g/christchurchofthevalley