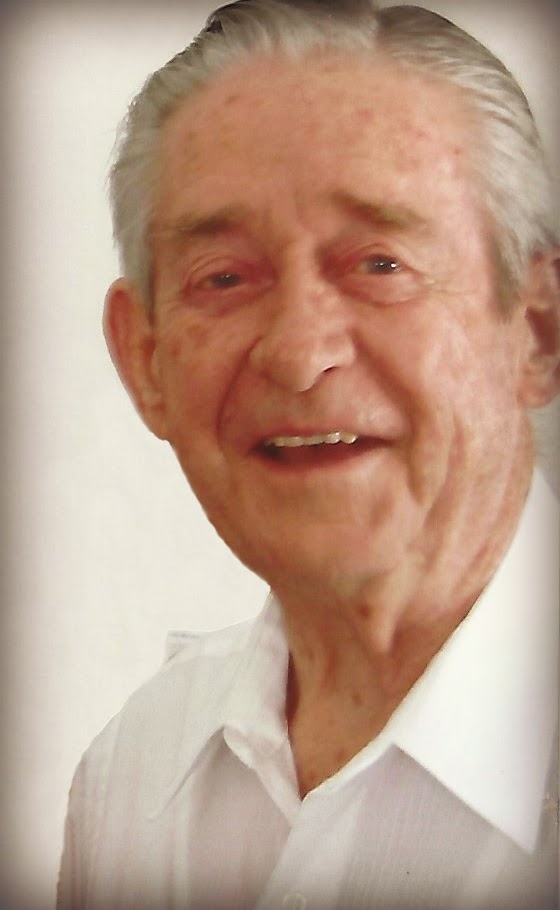 Raymond Nelson Larsen, 91, passed away May 26, 2018 at the Higley House Group Home in Gilbert, Arizona. Born on September 13, 1926 and raised in Brigham City, Utah, Raymond “Ray”was the youngest son of Merlin Russell Larsen and Judith Viola Nelson. He graduated from Box Elder High School in 1944, enlisted in the United States Navy that same year, and served in the Pacific Theater of Operations during WWII.

Ray and Kirma lived in Brigham City and Salt Lake before moving to Garfield, Utah, a mining town owned by Kennecott Copper. Eventually the town shuttered its doors and Ray transplanted his family to Magna, Utah in 1956. Ray was employed at Kennecott Copper Corp. as an Industrial Relations Representative. While thus employed, and while providing for his family, he attended and graduated from the University of Utah in 1964. In 1968 he began work for Marathon Steel in Phoenix, Arizona and moved his family to Tempe followed by subsequent moves to Sahuarita and later Mesa, Arizona. Upheavals in the copper industry, and facing an uncertain future, Raymond started his own business, ‘Ray’s Roofing’ and he took great pride in his skills and his ability to provide for his family. Managing a ‘Motel 6’ in the Phoenix area provided an income in later years prior to retirement.

Ray and Kirma have centered their entire lives around church service and family values and have been very blessed to acquire so many friends throughout their lives. Ray loved to teach the gospel of Jesus Christ and served in many leadership and teaching capacities. His and Kirma’s most difficult and challenging call came when they served an LDS mission to the West Indies. They worked tirelessly teaching the gospel, serving the poor, feeding the hungry, and learning how to live in a country of much poverty and hunger. Upon their return, they worked as temple and ordinance workers in their beloved Mesa Temple and performed much family genealogical work there.

Raymond always possessed a strong sensitivity towards the place of his birth. He loved Brigham City! The history, the people, the peach orchards, the panoramic views, but especially the majestic and rugged mountains to the east of the city where he spent much of his childhood.

Ray was an excellent carpenter and bricklayer and each of his homes reflected the benefits of his skills with room additions and modifications. In later years he enjoyed rebuilding old furniture and working in his shop. He also loved working in his orchard and many have benefitted from the fruits thereof.

Raymond was preceded in death by his parents; several siblings; a grandson, Kelly; and by his wife and beloved companion, Kirma, who passed away almost one year ago on June 28, 2017.

Our heartfelt gratitude goes out to Ella and those caregivers at Higley House as well as to Dad’s Home Teaching companion and best friend, Marv Hollingsworth, who ministered right to the end. Thank you and God Bless.

Funeral services will be held June 9, 2018 at the Cameron Ranch Ward, 3572 East Guadalupe Road, at 10:00am. Friends and family may call from 9:00-9:45am. Interment will be at the City of Mesa Cemetery. Condolences may be sent from http://www.bunkerfuneral.com/obituaries/raymond-nelson-larsen/