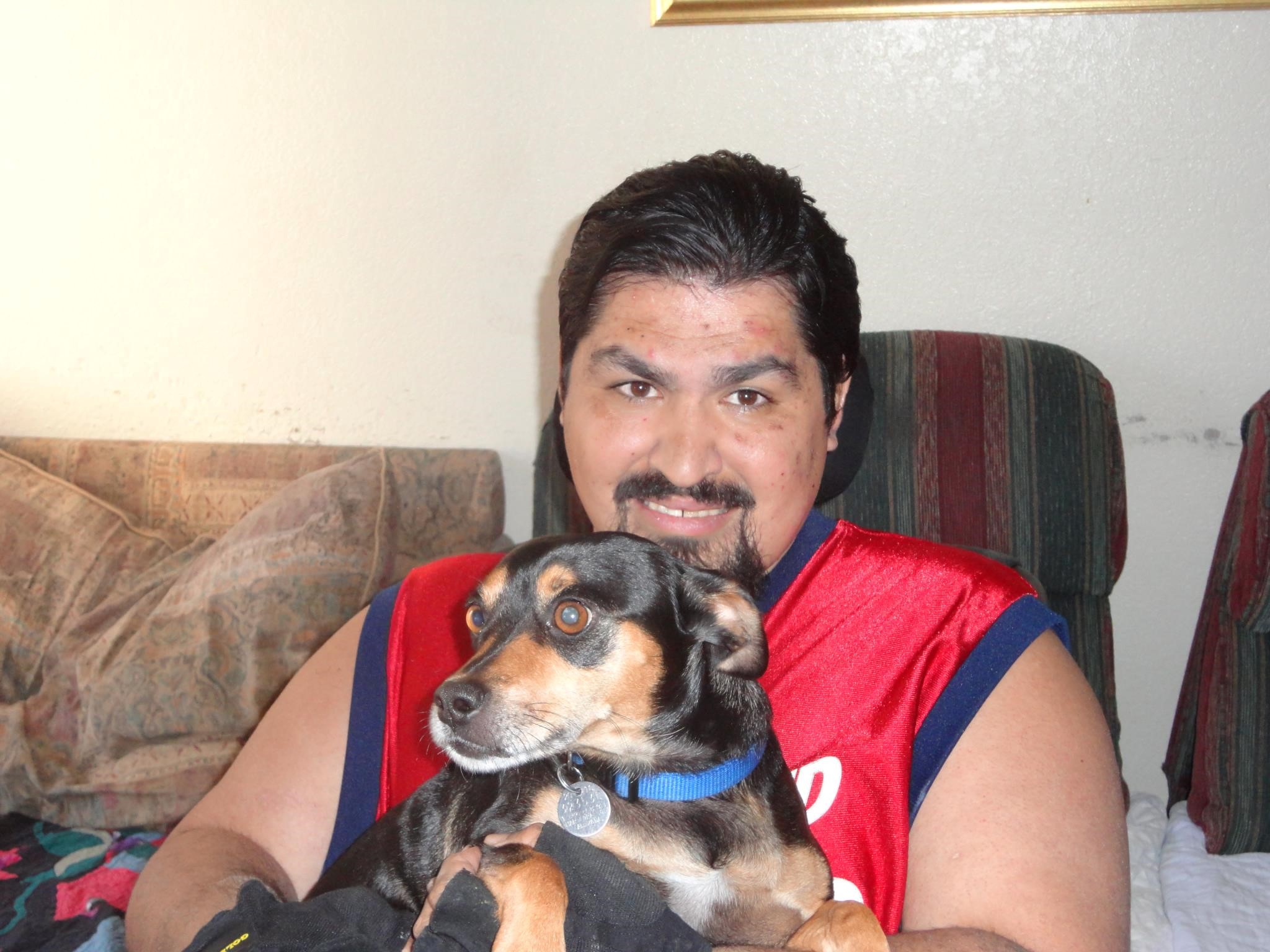 *Those attending services to honor Ramon will be required to wear a facemask and adhere to physical distancing guidelines at the mandate of the Governor and Mayor. For those who are uncomfortable attending, the services can be viewed at the following link: https://youtu.be/RdSDSwc-TS0

“A cheerful heart is good medicine, but a broken spirit saps a person’s strength.” Proverb 17:22

Mi niño lindo, mi pachutí, mi querido adorado….te quiero tanto mi amor… estes con Diosito.  Diosito te va cuidar…. duerma con los ángelitos mi niño lindo.  Those that knew Ramon knew that he was your medicine.  Our dear Ramon passed away of multiple illnesses and complications. His struggle in life after his major accident in August 2010 left him with a traumatic brain injury and in a coma for a year. Ramon had a terrible episode where he was carjacked and left for dead in a ditch in Phoenix on Van Buren Street.  Paramedics rushed him to the Maricopa Medical Center with 6 breaths a minute.  He underwent brain surgery, Dr. Cruz saved his life.  Ramon was fortunate to have his cousin Joey Evensiosky and one of his school classmates tend as his respiratory therapist while in ICU..they saved his life.  Joey shaved him for the first time after his accident.  He had many medical challenges throughout the last 10 years but he prevailed. He was a walking miracle. He was afflicted with 8-9 pneumonias, another brain surgery, kidney stones, multiple cardiac arrests…was comatose for a year and survived another 10 years.

Doctors and specialists were proven wrong over and over on their prognosis because Ramon was a fighter…a Football Tight End ~~~ Unstoppable~~ and a true believer of our Lord Jesus Christ.  Thank you to Valley Physical Medicine and Rehabilitation: Dr. Christine Kwasnica, Suzanne Kelly, Maria, Kenneth and multiple therapists, Barrow Neurological Institute, Banner Desert Rehab, Banner University, Banner Baywood and Trillium Specialty hospital.  Mi Casa Nursing Center, especially Natalie, Hanger-Reese, Numotion, AT Univ Dental Clinic, the interns and the many attending doctors that fought to keep him alive and healthy.

Ramon attended St. Catherine’s school, played flag football with Coach Danny Flores, and also played South Mountain East Little League with coach, Ralph Velez and dad Manuel.  He went on to South Mountain High, played Jaguars Frosh tight end having Dr. Leticia Ruiz as his director, and graduated from EL Dorado HS.  He attended Phoenix, Mesa and Pima College.  He completed Carpentry Certificates from Pima College.  His jobs included Fazoli’s, Papa Johns, L & M Kitchen and Bath, an Auto parts runner and Laborer. Ramon also was his mother’s apprentice with Ofelia’s Traditions and Catering. One of his last gigs was catering to our beloved AGUILA Leadership Institute… and for first time he could help fight for the rights of DACA students.

Ramon Nacho… Ramoncito was rich in life and lived it every moment of the day.  His story is a lesson of love and happiness, a lesson of pure strength, a lesson of true Christian faith, a lesson of unity, and a lesson of humanity.  And he played a mean Chess game…don’t even try dominoes or PS4 with him because he would beat you!!! He was a resident of Westchester TBI Home in Tempe and lived there with his beloved roommates; Allan and Julio; beloved caregivers Sophia, Bennie, Florian and Ruben. He was loved and he was their happy child, a family member.  Sophia says..”Gone but not forgotten. Gone to young, gone too soon. He was precious, beautiful, jovial, hilarious, a resident of our facility and most of all part of our life, part of our family.  God allowed Ramon to be medicine for all of us and his heart was always cheerful. He taught us to love more, to appreciate life more, to be grateful and to be better people for all.” He was a media internet buff…he would research everything. He wanted a purple mattress and already had an idea of the newest PS5 digital or regular video game, his negotiating skills were sharp, “he could sell ice to an Eskimo” …his nana Molly would say, “Hey, Ramon you could be a really good used car salesman!”  The other group home where Ramon lived in the valley was Everlasting with Tanya Wiebly, and his tutor Tiffany Bailey and Riley, and his chess mate caregiver Silvia who also took him to chess lessons. They loved him very much and he was their family member.

We express our most sincere gratitude to those that kept Ramon healthy.  To the first responders and health professionals, and his prayer warriors, those that worked with him daily, weekly and throughout the years who never gave up on him. You all made his world a lot more loving and fun.  We will forever be grateful for all your love and attention…It truly takes a Village…thank you Village.   Those who formed beautiful friendships and always had Ramon’s back..anytime, anyplace.

Ramon wanted to go to college, he did his own research and made an appointment with the Mesa College advisement center. The MCC Disability Center accepted him one full summer before classes began to teach him the use of the college online media tool.  Upon enrollment, he tested into College Algebra, and went on to successfully complete a college career course earning an “A” and a PED atypical fitness class with Jim Haggerty and Eric Estep who never gave up on him and went the extra mile to assure his safety and well-being and also for letting him be the only student allowed to play his Spotify in the gym. He was their mascot of a good fitness buff.  Thanks to his counselor Christopher, his personal attendant, counselors, tutors and his dear teacher Dr. Olivia Lara. Ramon loved his private fitness sessions with Self-Made Training Facility Fitness, special thanks to his coach Nick Johnson, who worked closely with his medical therapists to assure proper exercise.  He never gave up on Ramon.

His village consisted of his school classmates, his trainers, caregivers, family, friends, musicians, ninos and ninas.  For several years, Freddie Duran and cousin Melissa Canez surprised him at Trillium Hospital right after his coma with las mañanitas and birthday songs.  Angie Trujillo and her mother would also visit him and play Christian songs for him.  Father Jorge Eager held mass in the garden and continued with a rosary in the chapel. Much love to Ofelia’s nina Francis Castillo and the St. Catherine’s Guadalupanas who prayed at Ramon’s bedside creating a strong faithful fellowship of prayer warriors.  Thank you to Holy Cross in Mesa for the prayer group fellowship also…they truly loved Ramon and praised his wellness when he appeared at Mass on Easter Sunday for the first time.  It was a true revelation to see him healthy and praising Jesus.  Thank you to Queen of Peace Father Thomas and Deacon Richard, especially home visits during bereavement times,  Ash Wednesday for Ramon and his birthday masses; and dearest Ramona for his Sunday Eucharist visits.

Much gratitude to his great St. Catherine’s classmates, Joaquin Higuera for playing virtual games, visits and love.  Auncuncion Robles your love, phone calls, texts and events.  TJ Moreno for taking him to the Fiestas, SMC Reposo park gym, to your wedding, church and the Day on the Lake with St. Joseph’s Hospital.  Enrique and Brina for feeding him, giving him shelter and playing with the kids. To his beloved cousin, Jeff who never said no for helping me with NFL games, Fiestas, Lowrider Car Shows, Parades, Cheech & Chong…Baseball games.  To his beloved Tia/Nina Linda who many years spent alongside with me during our darkest moments thru cardiac arrests, pneumonias, operations, novenas, and Rosario’s, for all the food and Dutch and Starbucks coffees. His beloved Tia Pauline that always answered his phone calls, prayed with him, had long conversations and accompanied me to the ER medical emergencies. He was her angel.  Richard Ochoa thank you for sponsoring Ramon and family with free tickets to the awesome lowrider shows..those days were the highlights of his life. For the texting and love support from cousins Anissa, Monica, Rony, George & Arnold, Vanessa Blanca Canez, and Jaime Santamaria and many others that he would connect with.  Thank you Tio Ramon and Margarita & cousin Angel Cañez for hosting us in Tucson for 4th of July and many other holidays and for the menudo. Much love to Tia Julieta from Imuris, Son. Mexico that managed to visit with him at his home when in town and especially bringing him Mexican empanadas.

Thanks to Tio Arnold for going to watch the movies, baseball games and events…for assembling his recliners and TV, for being the handyman at the home.  And, of course his beloved extended family member’s endless cousins, aunts and uncles.  His beloved sister Alma and brothers Francisco and Manuel who never gave up on him and were in disposable for him always. Having lunch during work breaks, praying, ER visits, surgery visits, each taking turns to be with him while recovery…Thanksgiving, Christmas, Halloween and all special days… and most of all my Lord Jesus Christ for granting this angel into our lives, he surely was a God sent and made this world a better place, he was medicine to our souls and now will be in spirit. A spirit that will live in our lives forever.  Mijo querido Ramoncito Rest in Peace in God’s Kingdom.

To live stream Funeral Mass for Ramon today at 10:00 a.m. please click on or copy link below: