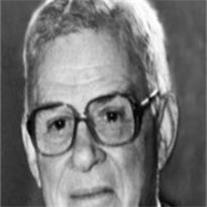 Ralph Charles Trejo died peacefully in his sleep Wednesday, April 16, 2009 in Mesa, Arizona. He was born September 9, 1915 in Benson, Arizona, the son of Jared Jones Trejo and Edith Annie McRae. He spent much of his youth in St. David, Arizona, leaving about the time of his 18th birthday to serve a mission for the Church of Jesus Christ of Latter-day Saints. He was called to serve in the East Central States Mission where he eventually became District President. In 1940, Ralph joined the Navy Air Corp., becoming a pilot. He served until October, 1945 having attained the rank of Lt. Commander and being awarded several citations including the Distinguished Flying Cross, the Air Medal and the Purple Heart. On July 12,1941 he married Edna Cardon in Alice, Texas and together they had two sons and two daughters. After the war, Ralph returned to Tucson, Arizona, completed school at the University of Arizona and worked for Shell Oil Co. In 1955, he bought the Shell Oil Bulk Plant in Casa Grande, Arizona where he and his family remained for many years. During this time he founded Trejo Oil Company which is still operated by his two sons. Among other responsibilities, he served as a Bishop in the LDS church for 13 years while living in Casa Grande. Upon retiring, he devoted 11 years to service in his church. Included were seven missions in the United States, Switzerland, Germany and the Philippines. Even though these missions included positions of mission president and temple presidency, Ralph particularly enjoyed his years as an ordinance worker in the Mesa, Arizona temple. After 45 years in Casa Grande, Ralph and Edna moved with some of their children to Gilbert where he remained until his death. Ralph was a devoted husband and father who is survived by his wife, Edna; sons, Jon (Roxanne) of Gilbert; Jerry (Sally) of Mesa; daughters Vicki (Scott) McEuen of Casa Grande; Pam (Gordon) Oborn of Provo, Utah. He leaves behind 21 grandchildren, one grandson having preceded him in death, and 58 great grandchildren. He is also survived by a brother and 3 sisters; Alfred Trejo of St. David, Pearl Martineau and Garnet Standage of Mesa and Opal Brimhall of Prescott. Viewings will be held at Bunker’s Garden Chapel, 33 N. Centennial Way, Mesa Arizona on Tuesday, April 21st from 6 to 8 PM and on Wednesday, April 22nd at 10 a.m. at the Gilbert Highland Stake Center, 3580 E. Houston Avenue, Gilbert, Arizona. Funeral services will follow at 11:00 AM at the Stake Center. In lieu of flowers, the family suggests donations to the United Food Bank or the Perpetual Education Fund of the Church of Jesus Christ of Latter-day Saints.