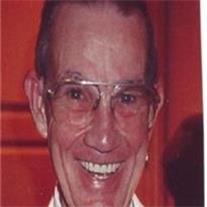 After strong arming the Death Angel for 15 years, Ralph Jackson entered into final rest surrounded by his family in his home on February 6, 2012 at the age of 92. Ralph was born in Hazen, Arkansas on February 6, 1920. He retired to Mesa, Arizona in 1970 after 27 years in the United States Air Force, retiring as a Lieutenant Colonel. He then worked for Valley National Bank as an Assistant Comptroller. He was active in the Sons of the American Revolution, Military Officers of America Association and the Mayflower Society.

Ralph served in World War ll in the European theater as a pilot and received the Air Medal. He received a bachelor’s degree in Military Science and a master’s degree in Accountancy.

He was preceded in death by his parents, Terrell and Margaret (Maggie May Sanders) Jackson, and four brothers and a sister.

Ralph was a man of courage and honor and an inspiration to his family and friends. He will be missed. Services will be held on Saturday, Feb. 11, 2012 at 11:00a.m., at Grace United Methodist Church, 2024 E. University Dr., Mesa, AZ 85213. Donations in lieu of flowers can be made to a charity of your choice.