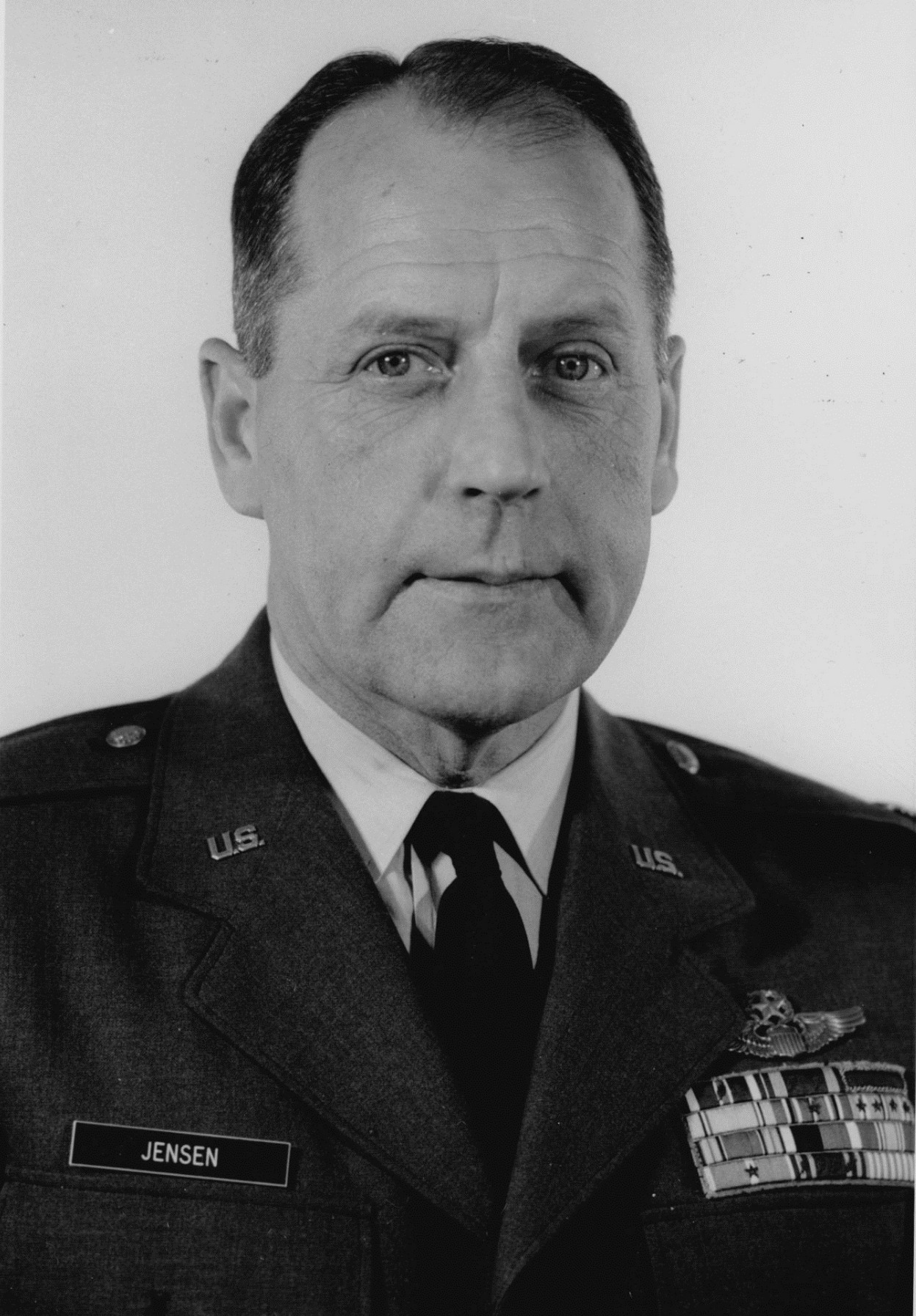 Send Photo of Ralph A. Jensen

Ralph was born Dec 2, 1917 in Devils Lake, North Dakota.  His father, Martin Jensen, was from Lillehammer, Norway and his Mother, Rena Anderson Jensen, was from Lom, Norway.  Both immigrated from Norway to the United States in 1907.  Ralph grew up and kicked around in the town of Devils Lake with his six other siblings: three brothers and three sisters.  He graduated from high school in 1936, at which time he was a key player on the basketball team and captain of the football team.  He was chosen as an all state football player.  He participated in the school plays and was vice president of his senior class.  After graduation in 1937, Ralph and his brother Roy jumped on a train bound for the west coast.  They wound up in Portland, Oregon working in a fishery for a summer.  In 1938, and 1939, he attended Concordia College in Moorhead, Minnesota.  There, he met his wife to be: Rachel.  He was again captain of the footfall team.  Played center and guard and was again chosen for the all state.

The war broke out and Ralph signed up and took the test to fly.  He was accepted and received his orders to report to Oxnard, Calif. for primary flight training.  He soloed the PT-17 (Serarman) in 8 hours: not bad.  He completed flight training in 1941, and received his commission as a 2nd Lieutenant.  In 1941, he not only became a pilot, he also married Rachel.  It was a good year!  In 1942, he was transferred to Jacksonville, Florida and assigned to submarine patrol flying the A-29.  This was another good year for Ralph because his first daughter, Sharon was born.  In 1943, he relocated to Clovis, New Mexico, where he learned to fly the B-24.  He was then sent Blythe, Calif., for advanced training in the B-24.  In 1944, he spent 9 months flying combat missions out of India, and survived.  In 1945, the war ended.  Ralph was discharged, and moved to Everett, Washington where number two daughter, Roberta, was born.

He was soon hired by Capital Airlines in 1945, and flew for them thru 1946.  The family moved to Chicago and Ralph flew out of Midway Airport.  That year, his son Gordon, was born.  That year, with three kids, he was furloughed three times.  That stress was too much.  That ended the airline business.

He went back into the USAF as a regular commissioned officer.  In 1948, he and his family moved to Biloxi, Mississippi.  1948, 1949, and 1950, found them in Japan.  In 1950 Ralph spent a 9 month tour flying in Korea.  In 1951, he was transferred back to Clovis, New Mexico where he was a multi-engine flight instructor.  In 1952, 1953, he was transferred to Seattle, Washington where he was in charge of the University of Washington’s ROTC program.

In 1966, he retired from the USAF, having served 28 years, and participated in two wars as a pilot.  He definitely had a wonderful, full and well done career.  From 1966 on, he had a couple of jobs, but mainly spent his summers in Twisp, Washington, where he built a home next to the Twisp River.  He then spent winters in San Carlos, Mexico.  He finally settled in Mesa, Arizona for the winters and Show-low, Arizona in the summers.  Through the years he enjoyed several cruises and many visits to his kids.  Dad was so very well liked and loved by so many of us.  For certain he led a very full and noble life.