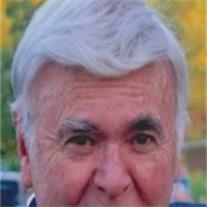 Philip Kerry Allen, 78, passed away on Sunday August 18, 2013 in Mesa Arizona. He was born in Safford, Arizona on December 29, 1934 to Philip Curtis Allen and Lorene Morris Allen and was the oldest of five children. Kerry married the love of his life, LaRee Maloy, in Safford and was later solemnized in the Salt Lake City Temple a few months later. He is survived by his four children; Kerri Sue Kleiner (John) of Mesa, Wyatt M. Allen (Stacy) of Syracuse, Utah, Michael P. Allen (Paula) of Washington City, Utah, and Brittan H. Allen (Leah) of Las Vegas, Nevada, 19 grandchildren and 22 great grandchildren. Additionally he is survived by his sisters; Philis Allen of Thatcher, Diana DeMille of Gilbert, brothers, Darr Allen of Mesa, Steve Allen of Snowflake and his step-mother Elba Allen of Mesa. After graduating from Thatcher High School he attended Eastern Arizona College and the University of Arizona. He was employed by Frontier Airlines as a station manager in numerous locations throughout the western United States. He later became a regional director for the Airline Employees Association. Relocating back to Arizona, he was a real estate broker and served as a property manager for 25 years. Kerry was a faithful member of the Church of Jesus Christ of Latter-day Saints and held positions in bishoprics, high councils, and as a missionary and numerous callings. He and his wife, LaRee, served missions together in Washington D.C. and Milwaukee, Wisconsin. A viewing will be held Friday, August 23, 2013 from 6-8 PM in the Lazona building (1345 East University in Mesa) and at 10 AM, Saturday August 24, with services following at 11 AM at the same location. Interment will be at the Mesa Cemetery following the services. Arrangements by Bunker’s Garden Chapel.