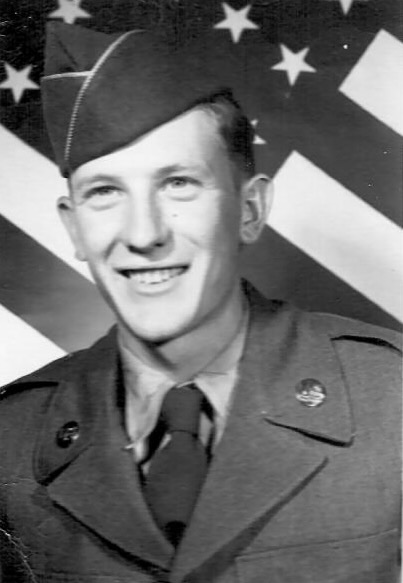 Philip Thelmer Hyink was born on August 8, 1932 in Hospers, IA to Lawrence and Matilda (Groen) Hyink.

He worked on his parent’s farm growing up and then worked on neighboring farms and with an electrician. He told of how he was totally out of money and almost out of gas in his car. The electrician was hiring and said he knew a little about it. The owner soon knew he didn’t know much but he worked so hard that day he let him continue working for $1.00 a day which was a big raise from his last job. The owner even paid him the first day so he could put gas in his car.

When the Korean War broke out, Phil was drafted and sent to basic training in California. On June 19, 1953 Phil was injured badly as a result of action with enemy forces. He told of laying out in the open thinking of his mom and Jeanine reciting the 23rd Psalm before losing consciousness. Fellow service men came to rescue him with heroic efforts. He spent several months in a hospital in Japan. He didn’t receive his discharge until August 21, 1954 but was awarded the Korean Service Medal Bronze Service Star, United Nations Service Medal, National Defense Service Medal, Good Conduct Medal and Purple Heart. His brothers and sister call him their hero.

When Phil was reunited with Jeanine after the Korean War, they lived on a farm south of Winfred. While living in that area, Jeanine gave birth to their first son, David Lawrence, on September 21, 1955, and daughter, Nancy Jo, on August 11, 1958.

Then, after a tough year of farming in South Dakota, moved to Long Prairie, MN where his sister Leora lived with her husband Gene. They bought a farm and 25 milk cows. There is where Jeanine gave birth to their second son, Keith Allen, on March 3, 1963.

After Phil became terribly allergic to all aspects of farming, they moved to Zumbrota MN where he attended Tech school. That schooling won him a mechanics position for Jensen & Gas Implement in 1965 at Arlington, SD. Later in life Phil and Jeanine decided to start their own business and ran the Texaco station until they purchased Sieck’s Service Station He sold gas, serviced cars and also learned the art of fixing radiators. While living in Arlington, Phil was very active with the American Legion. He serviced as Commander and spent many hours preparing and serving at mountain oyster feeds along many activities sponsored by the Legion.

After visiting their two sons in Mesa Arizona they came home, sold their house and moved to Mesa in 2000. Phil did maintenance for Good Shepherd Care Facility and was very active at Church of the Master. Phil volunteered to prepare and cook for the Wednesday night kid’s programs and spent many hours buying and distributing food to the needy for the church’s food program.

During the Covid outbreak Phil became high risk for falling so he moved into a group home and rented his house. His family was able to see him every Saturday in the garage of the home or in the park nearby. On April 16th, he was rushed to the hospital with an infection that was all throughout his body and he was not able to fight it even with antibiotics. He took his last breaths on May 1, 2021, while David and Lori were with him on Saturday morning.

Phil’s life will be celebrated at 10:00 am on Friday, May 21, 2021 at Church of the Master Presbyterian Church, 6659 E University Dr., Mesa, AZ 85205, where he and Jeanine attended and served while living in Arizona. His ashes will be distributed beside his wife’s in the church’s rose garden after the service.