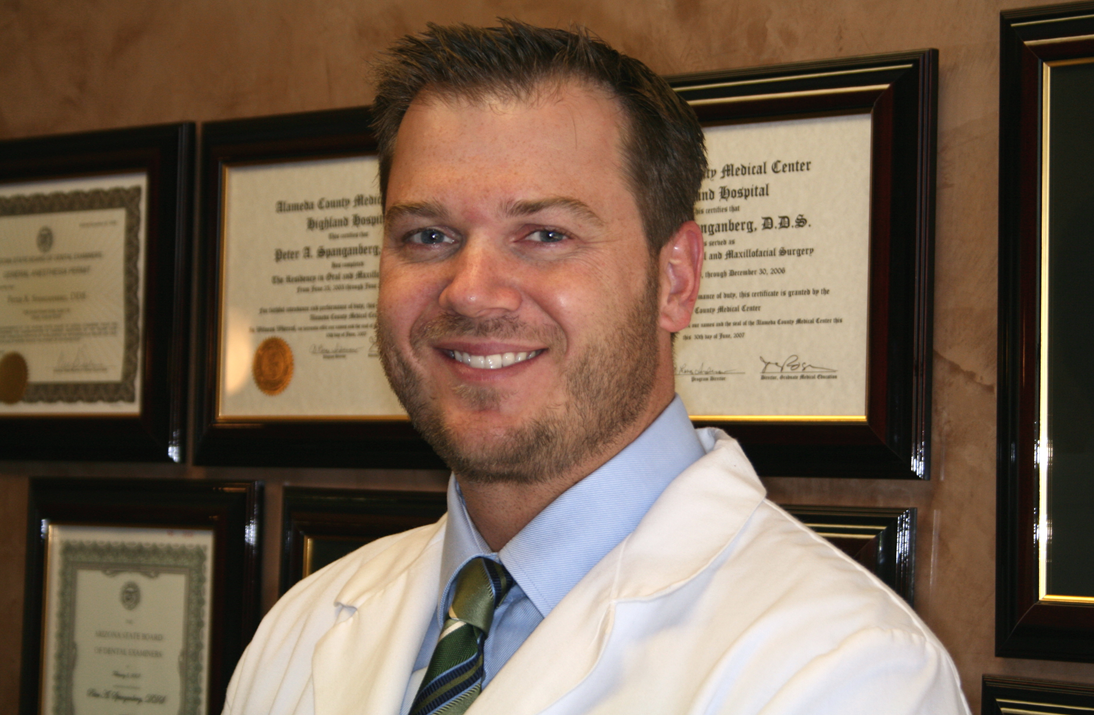 Peter Anderson Spanganberg passed away on Monday, September 20, 2021 at age 48 in Mesa, Arizona. He was born December 3, 1972 in Clifton Springs, NY to Eugene and Charlotte Spanganberg of Palmyra, NY. He was the youngest of four children. Peter was a devoted son, brother, uncle, husband, father, and friend.

After graduating with honors from Brigham Young University, Peter attended the University of Maryland School of Dentistry. During dental school, Peter was elected student body president and was active in several research projects and graduated with honors. After dental school, he completed a 4 year surgical residency in Oral and Maxillofacial Surgery at the University of the Pacific at Alameda Hospital in Oakland, CA.

In 2007, following residency, Peter and Heather and their young son, Ethan, moved to Queen Creek Arizona, where Peter opened the Sonoma Oral and Facial Surgery practice. Eventually, his practice expanded to include an office in Yuma, AZ.

Peter was a frequent contributor and lecturer on oral and facial surgery devices and techniques. In addition, Peter committed a portion of his time and practice to pro bono medical services to those in need. He took a particular interest in cancer patients and provided cosmetic and dental procedures for those in need.

In 2010, Peter married his second wife, Lynn Northern and welcomed into his heart her children, Nemi and Sage Northern. In 2013, their youngest son, Shea, was born into an active and busy household.

Pete had a deep love of family and friends. His family has countless stories of Pete rearranging his busy schedule to come to the rescue of a family member or friend with needs. He was beloved for his wit, fun loving attitude, and kind heart.  Peter had a love for adventure and travel. In his earlier years, he ran 3 marathons and went skydiving. He obtained his private pilot’s license and enjoyed flying for both business and pleasure. He looked forward to a good scuba diving trip and went Great White Shark cage diving. A favorite memory for him was kayaking the San Juan Islands and scuba diving in Hawaii and Cozumel with Ethan. He loved beautiful cars and enjoyed racing high performance vehicles. He and his family looked forward to winter ski trips to Utah and trips to the beach. He was looking forward to a heli-ski trip in Alaska this coming winter. Peter and Lynn shared a common love for animals, and they collected a menagerie of them, including many family dogs, exotic cats, horses, reptiles, and a giant tortoise. His dream was to one day acquire a giraffe!

What Peter considered his greatest accomplishment in life was his family, whom he loved dearly.  Peter died in the Banner Desert Medical Center, in Mesa Arizona at the too young age of 48 due to complications associated with the Covid-19 Virus. He leaves behind his wife Lynn, children, Nemi, Ethan, Sage and Shea and his former wife, Heather Spanganberg. He is also survived by a brother, Rob of Rochester, NY, sister, Leslie Doughty (Chris) of Wrentham, MA and sister, Elaine Zelter (Peter) of Naples, NY and many nieces and nephews, friends, and associates. He was predeceased by his parents Eugene and Charlotte Spanganberg.  Peter will be dearly missed by all who knew and loved him.

A Celebration of Life will be held on Saturday, October 9th, 2021 at 10:00 am at The Church of Jesus Christ of Latter-Day Saints, 21915 E. Cloud Rd. Queen Creek, AZ.  Arrangements made by Bunker