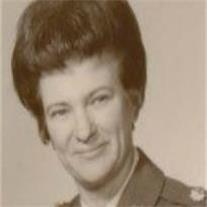 Patsy Dell Dotter Walding died November 8, 2012. A memorial service will be held on Wednesday, December 5, in the 76th Ward building of the Church of Jesus Christ of Latter-day Saints in Mesa, AZ. Bishop Lynn Leatham will be presiding. She was born in Stillwater, OK on November 27, 1925 to Frank A. and Alta E. McKaughan Dotter. After graduating from Stillwater High School, Patsy went to nursing school in Texas. Following completion of her schooling she joined the U. S. Air Force. In her role as an Air Force nurse she traveled all over the world. Her duties took her to Germany, Japan and Vietnam. She was married to Bill Walding in 1972. Patsy loved traveling and seeing new places. When she retired from the Air Force she settled in Ft. Worth, TX. While in Ft. Worth she went back to school and got an associate’s degree in horticulture. She enjoyed her own garden and volunteering at the botanical garden. She also volunteered in local hospitals. She moved back to Stillwater to be near her Mother and Sister. While in Stillwater she attended First Christian Church and was active in the American Legion. She volunteered with a number of organizations and loved serving. In 2011 she and her sister moved to Mesa, AZ. Patsy was preceded in death by her husband Bill, her parents, Frank and Alta, and her brother, Kenneth. She is survived by one sister: Jonita Dotter Milligan of Mesa, AZ and one Brother: Frank “Buddy