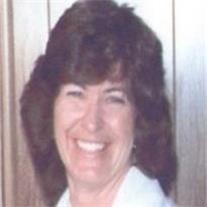 Patsy Jo Eagar Tucker was born 03 July 1949 in McNary, Arizona to James Pratt Eagar and Vera Mae Sharp Eagar and passed away after a prolonged illness in Mesa. Arizona on 08 July 2012. She is survived by Bruce, her husband of 28 years, son Joshua of Florida, daughter Heather of Mesa; sister Vera Rae Chapman of Kingman and brother Larry of Phoenix.

In 1968 Patsy graduated from Round Valley High School where she played drums in band, participated in chorus, was Business Editor of the yearbook and President of the FHA. In 1970 she graduated from Eastern Arizona Junior College where she was editor of the college yearbook. She received a bachelor degree in 1973 and did post graduate work in Special Education and Developmentally Handicapped Children at Arizona State University.

Patsy taught Special Education at the RICH school in the Roosevelt School District in South Phoenix 1973 through 1988, working with the trainable mentally handicapped students ages 12 – 16. She participated in the development of a vocational program at RICH, preparing many handicapped students to live on their own, hold jobs and to participate successfully in society. She was Co-Chairman of Special Olympics in Maricopa County for several years and was a City of Phoenix Parks and Recreation leader where she planned and led the city’s summer recreation program for the Trainable Mentally Handicapped students. During the late 1970s and early 1980s Patsy served on the governor’s advisory board for special education. After leaving RICH Patsy taught a combination second and third grade class and first grade for three years at Maxine O Bush elementary school in the Roosevelt School District.

Many benefited from her sharing these talents. Patsy found delight in providing service to others and was always concerned about the underdog. Patsy was a life-long active member of the Church of Jesus Christ of Latter-day Saints.