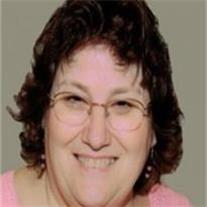 Patricia Kathleen Eyring peacefully left this mortal world with her family at her bedside 4 Sept. 2012. She was born 17 March 1947 in Mesa, AZ, the 5th child of Verda and Wendell Eyring. She grew up in Chandler, graduating from Chandler High in 1965. When she was young her family called her Pat. She began working for Motorola in 1966. While there she acquired the nickname “Pinky” and has been known as Pinky for nearly 40 years. She retired from Motorola after 32 years. Pinky has 4 brothers and 5 sisters, 45 nieces/nephews, over 117 grand-nieces/nephews, more than a dozen great-grand nieces/nephews – all of whom thought they were her favorite. Swimming at Pinky’s pool was the thing to do every summer. She remembered to send each a birthday card every year. Pinky had a beautiful singing voice. She sang in choirs and also sang many solos. She shared her faith in Jesus Christ through her music. In May 2012 Pinky learned she had cancer. It was hoped chemo would work and she could remain with her family for years. This was not to be. When she learned that her time was short she was at peace with it. Pinky is preceded in death by her parents, sister Shirly, brother Mike. Siblings who remain: Wendell, Jr., Sandra, Murr, Dixie, Nick, April, and Twila. Visitation will be Fri. 7 Sept. 2012 at Bunker’s Garden Chapel, 33 N. Centennial Way in Mesa. Funeral services are Saturday 8 Sept. 2012 at 1 PM, preceded by a visitation 12 noon at the LDS Chapel at 1871 E. Del Rio Dr. in Tempe. Interment to follow at the Valley of the Sun cemetery in Chandler.