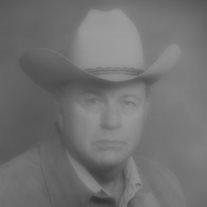 Larson, Ordell Bryce, 90, of Sun Lakes, AZ passed away on February 16, 2014. He is survived by his wife, Katherine (Kaye), sons Jon of Denver, CO and Tom, of Santa Barbara, CA, and his step-daughter Tanya of Sun Lakes, AZ. Additional survivors include his brother and his wife, Ted and Mona Larson, nineteen nieces and nephews, and many great-nieces and great-nephews. Ordell was born in Solomonville, AZ February 26, 1923 to Moroni and Annie Larson. The family owned a large dairy and farm where Ordell, along with his sister, Geraldine, and his brothers Rulon and Ted, learned his farming and ranching skills. After graduating from Safford High School, he served in the U.S. Army in the Pacific Theatre. In 1942, Ordell married Wille Reese Hoopes, and after being discharged from the army, he moved his family to a cattle ranch northeast of Colorado, Springs, CO where he ranched until 1983. The first marriage ended in 1970 and Ordell married Kaye Schaefer in 1972. Upon his retirement, he and Kaye moved to Sun Lakes, AZ. Ordell was also a real estate broker as well as a valued member of the cattle and horse communities in the Colorado Springs area. He was a lifetime member and past president of the Pikes Peak Cattlemen’s Association, the Pikes Peak Range Riders, the Soil Conservation Society of America and a charter member of the National Cattlemen’s Association and the Pikes Peak Quarter Horse Association. An accomplished southwest-style jewelry maker, Ordell taught jewelry design in the Rock and Gem class for the Sun Lakes community, where he was known as Chico. He was also a wood carver and created many authentic kachina figures that are prized by family and friends. The family would like to extend its thanks to Grace Hospice for its very professional and attentive care. In lieu of flowers, donations can be made in Ordell’s name to Grace Hospice, www.gracehospice.org. Arrangements were handled by Bunker’s Garden Chapel