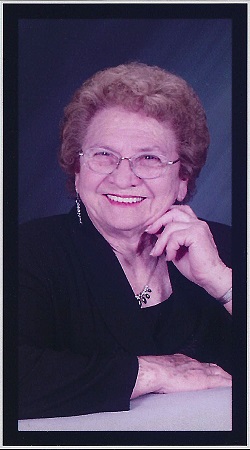 Ora Amanda (Tietjen) Sabin was born on 22 December 1927 in Bluewater New Mexico. This is a small town not far from Grants New Mexico. She was known as Amanda while living at Bluewater and is still called that by many of her relatives. Before she started High School, her parents decided to send her to Mesa Arizona.

Mesa is where she met Wallace D. Sabin. They were married on 2 May 1945 in the Mesa Arizona Temple. She lived in Logan Utah while Wallace attended Utah State, then moved to Yuba City California. She a1so lived in Davenport Iowa while on a Family History Mission. Ora has lived in Mesa most of her married life. While living in Mesa, she has gone by Ora as her name.

Ora is the mother of 6 children, 20 grandchildren and 19 great-grandchildren. She was married to Wallace for 72 years when he died on 10 August 2017. Ora has always said she was ready to meet him again. When asked, she would tell her grandchildren it would only be in a year or two.

In August of this year, Ora was diagnosed with cancer. In September, she went up to Colorado to see her last remaining sister, Iris. Ora had a wonderful visit, but shortly after her return she began to feel the effects of the cancer. Ora also contracted COVID, which complicated things. She died on 29 December 2020, a week after her birthday.

Funeral on Saturday, 9 January 2020Viewing at 10:00 and Funeral at 11:00. To help with the number of people attending,
the family has asked that only family attend the funeral in person and that others attend via the Zoom broadcast.