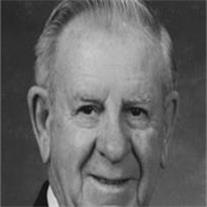 Neldon Ray Cook, beloved by family, friends, and everyone who knew him, passed away on Saturday, March 17, 2012 after 93 years of earthly service. Neldon spent his life in service to his fellowman, always doing a good deed daily. Born in Raines, Utah, sixth of nine children to Emma Myrtle Tidwell and William Cook, he left Utah to serve his country in the United States Army Air Corps during WWII as a link trainer instructor near Deming, NM. He met his beautiful bride of 66 years, and together they served in many offices and callings in the LDS church, mainly for the Glendale and Phoenix West Stake. He worked for Arizona Public Service for 34 years. He was involved in serving his community through the Toastmaster’s International, Sertoma Club, Glendale Junior Chamber of Commerce and Boy Scouts of America, honored as a recipient of the BSA Silver Beaver Award. Together Neldon and Betty Jo have raised four children—Gayle (Arman) Pace, Neldon Victor (Kathleen), William Ray (Cynthia), and Betty Jo Heath. Their 16 grandchildren and 39+ great grandchildren are their legacy of a life of service and love. He is survived by his wife Betty Jo Christensen and his sister Shirley Cook King of Wellington, Utah. The family would like to thank Hospice Family Care for their many kindnesses. A viewing will be held on Thursday, March 22 at Bunker’s Garden Chapel, 33 N. Centennial Way, Mesa from 6:00 to 8:00 p.m. Funeral services will be held on Friday, March 23 at the Grandview 1st Ward Building, 1455 N. Harris, Mesa; the viewing will begin at 10:00 a.m. and services at 11:00. Military honors will be held at the Mesa Cemetery immediately following the service. Flowers can be sent to Bunker’s Garden Chapel. The greatest tribute one can give is to follow his example by doing a kind act for someone today.