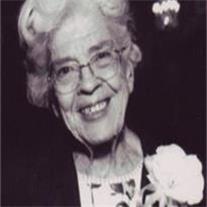 Ireta B. Updike, age 92, died on April 9, 2012 in Mesa, Arizona, and is reunited with family and her eternal companion Paul J. Updike, who passed in 1996. Nancy Ireta Bench was born in Fairview, Utah to John L. and Elvira Cox Bench, the seventh in a family of 8 living children. Her early life was shaped by her Mormon faith, a loving father and mother, the trials of the Great Depression, farming, a large extended family, and the mountains and valleys of central Utah. Upon graduating North Sanpete High School, she began nursing training at LDS Hospital in 1939 in SLC. She came to Mesa, AZ for health reasons and to further her nursing training at Mesa Southside Hospital. She also met her future husband, Paul at a Mezona dance. Upon her graduation in Utah as an RN, she returned to Mesa in the fall of 1941. Paul finished his LDS Mission in the summer of 1942. They married that November in the Mesa Arizona Temple. Their family grew quickly, with seven children eventually gracing their Phoenix home. Ireta also continued as a nurse, periodically helping to supplement the family’s income. Her nursing skills were her hallmark for over 45 years. Besides nursing, she served in her church as a teacher and in compassionate service. She was also elected as PTA president twice at Emerson School in Phoenix. Most famous of her many skills were her legendary homemade bread and rolls, enticing many to just skip dessert. Ireta is survived by seven children Lisle (Julene), Robert (Margaret), John (Janet), Galen (Maxine), Janet ( Rod Campbell), Paul Jr.(Cari), and Nancy (Art Case), 43 living grandchildren, (2 pre-deceased her) and currently 79 great-grandchildren. Her Funeral will be Saturday, April 21, at 10:30 AM, preceded by a visitation at 9 AM at the LDS Vineyard Ward, 1054 W. 2nd Place, Mesa. Burial at Greenwood Memory Lawn in Phoenix at 2 PM. Arrangements by Bunker’s Garden Chapel.