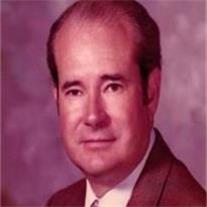 Milton Lee, loving husband, father, brother, grandfather, great-grandfather and East Valley leader passed away March 23, 2012, with his family by his side after a two year battle with cancer. He was born on March 11, 1928, in Oklahoma City, Oklahoma to Elisha Vernon and Kathryn Degrush. Milton is survived by his wife Betty of 32 years, 8 children, Roberta Carambia (John), Hemet CA, Mary Beal, St. Charles, MO, Randy Lee (Suzanne), Las Vegas, NV, Terry Gorham, New River AZ, Patrick Lee, Mesa, AZ, Kelly Lee, Pine, AZ, Danny Lee, Mesa, AZ, Casey Lee, Thornton, CO, 17 grandchildren and 20 great-grandchildren, three brothers and two sisters; John, Ralph, Pat, Mary and June. He is preceded in death by his brother Jimmy. Milton and his family relocated to Phoenix, when he was three-months old; however, he always considered himself a native. He attended Baltz Elementary and Phoenix Union High School, where he played baseball, football and ran track. In 1944, he enlisted in the United States Navy, and spent 24 months in the South Pacific during World War II and was the recipient of numerous commendations. He was honorably discharged in late 1946. After returning to Phoenix, Lee took up his grandfather’s trade as a barber and ultimately became a member of the Barber’s Hall of Fame. He was a behind the scenes kind of man that had a vision for Phoenix, and the East Valley in particular. He conceived out of the box ideas and helped them become reality. He was a master at bringing the community and politicians together to accomplish a common goal. In the late 1940’s, he took on increasing responsibilities as a labor official, becoming an officer and lobbyist for the AFL-CIO. He managed several congressional and senate campaigns. He supported what he believed were good leaders from both parties, even though he was a Democrat. From 1957 to 1965, he focused on furthering his education and received specialized training from UCLA, University of California-Berkley, Loyola University and National Training Laboratories in Bethel, ME. This advanced education changed his life significantly and moved him from a labor official to a life of social work and community service. From 1957 -1963, he was Employee Relations Director for the Phoenix United Way, all while raising a young family. In the early sixties, he led the effort to provide mass polio immunizations in Arizona. From 1963 to 1966 he took on additional responsibilities as the Assistant to the General President of the Barber’s International Union. During the early to mid 1960s, he worked as a political strategist to President John F. Kennedy and wrote Medicare speeches for Hubert H. Humphrey and the National Council of Senior Citizens. From 1966 to 1991, he served as the President and CEO of the Mesa United Way and Founder and President of the Tri-City Community Service Board. During this period, he found time to mastermind and implement some two dozen community programs that responded to a variety of human-service needs. Recipients of those efforts have included the needy, the hungry, the homeless and the abused. Among his most notable contributions was his involvement in the creation of Tri-City Community Service Center. The Old Southside hospital was redesigned to be used as a central, one-stop headquarters for 116 social services – the largest complex of its kind in the nation. He also developed the community’s Women-Off-Welfare, or WOW program, which has received national recognition. He helped with Mesa’s application for the coveted All-America City Award and was among the city’s key leaders who presented the Mesa presentation in Lexington, KY. Project Time Out, a concept designed to deter school drop-outs, won the top award of the National Association of County Governments. Additionally, he was founder of the Mesa Public Safety Foundation, an organization that honors Mesa police, Mesa fire, and other first responder organizations for outstanding service. In a cooperative venture with the University of Arizona, he conceptualized and helped found the East Valley Cancer Satellite. He led the effort to create the East Valley Behavioral Health Council, an agency which coordinates mental health programs in the East Valley and helps ensure their receipt of state and national funding. He developed the concept of the United Food Distribution Center, which stands as a national model for the efficient distribution of food to food banks and pantries. He was co-founder of the East Valley Partnership, a group of community leaders whose efforts are focused on ensuring the equitable distribution of state and national resources to the East Valley. He was a consultant to Republican John Rhodes, further illustrating the breadth of his ability to work with widely varying political interests. At the same time, he represented the interests of two leading Democrats, Governor Bruce Babbitt and U.S. Senator Dennis DeConcini. Lee’s other activities have included his service on the Rio Salado Authority and the 1986 Maricopa County Citizens Bond Committee. He was a founding Board Member and President of the Arizona Department of Economic Security. In addition to his other honors, was named Outstanding Citizen of Mesa in l980 and “Man of the Year in 1981. In 1988 he received a Key to the City of Mesa. No other Mesa citizen has ever received such an honor. He has also been honored with the top Rotary Club award, which is named “Service Above Self