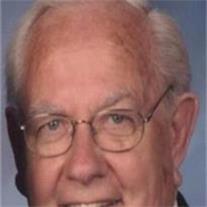 Milo Richard LeBaron Jr. (80) passed away February 8, 2013. He was born on June 27, 1932 in Mesa Arizona to Milo and Wanda Hill LeBaron. Milo is survived by his wife of 61 years Donna Brinton LeBaron, his 6 children Christi Palmer (Denny), Cherie Rapier (Dave), Laura Skinner (Dan), Milo LeBaron,III (Julia), Diana Huish (Eric), and Elise Nielson, 32 grandchildren, 42 great-grandchildren, 4 siblings, Jan Carroll, Sally Sue Nelson, Cheryl Cummard, and Michael LeBaron. He was an active member of The Church of Jesus Christ of Latter-Day-Saints, and was blessed to serve in many callings, including Scout Master, Bishop, and several mission. He served as Mission President of the Los Angeles, and Salt Lake City, Temple Square Missions. He was the co-owner of LeBaron & Carroll Insurance, and served locally, and nationally, for the Independent Insurance Agents of America. But most of all, he loved the time spent with his family, camping, traveling, playing games, time at the cabin, and even shopping. In the last years of his life he was given loving care by his wife, family, Hospice of the Valley, and Citrus Manor Care Center. Visitation is Friday, February 15, 2013 from 6- 8 PM at Bunker’s Garden Chapel, 33 N. Centennial Way in Mesa. Funeral Services are Saturday, February 16, 2013 at 11AM, preceded by a visitation from 10:00-10:45, at the Mesa Central Stake Center, 925 N. Harris St.