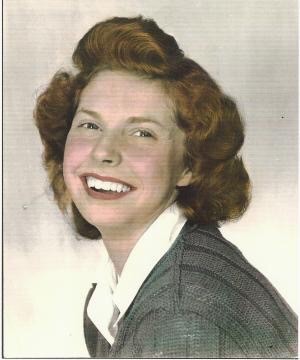 Robbie Abaroa passed away peacefully in Gilbert AZ on July 11, 2021 just a few days after her 94th birthday on July 7. She was born Mildred Roberta Rowley to Clarence and Genevieve Rowley in 1927 in Kansas City, Kansas. Robbie led a very happy, active life painting Christmas ornaments, working in a tuna factory, performing as a sharpshooter for the San Diego Homeland Defense during WWII, laboring as a budget analyst for the Navy and the Marines, toiling as a small business owner, operating as a real estate agent and broker, and traveling the world. While at the same time, Robbie mothered seven children, 37 grandchildren, 73 great grandchildren (3 more coming soon), and 7 great-great grandchildren.

Robbie grew up in Kansas with her two brothers, Jimmy and George. She was the only girl in her neighborhood teaching her to be a rough and tough companion. In 1944, Robbie moved with her family to San Diego CA where she met her best friend, Vickie Abaroa Brionez. At the end of WWII, Vickie introduced Robbie to her brother, Ramon, who had been serving in the United States Army. They fell in love and married on July 31, 1946. After getting a business degree, Robbie began working for the US Government as a budget analyst for the Department of the Navy. At the same time, Ramon worked as a Naval Air Force mechanic. Robbie and Ramon chose to live in Lemon Grove CA where over the years they became parents of seven children: Eva Peterson (Richard); Susan Robinson (Greg); Steven Abaroa (DeeAnn); Karyn Bolton (Jim); Fred Abaroa (Polly); Michele Siufanua (Sam); Josie Paredes (Andrew). She also fostered five children from Costa Rica.

While in Lemon Grove, still working for the Navy, she and Ramon became owners/managers of the Abaroa Egg Ranch. Many mornings she could be found delivering eggs to the elementary schools and restaurants in Lemon Grove. A few years before retiring from government work, she was transferred to the Marine Corp Recruiting Depot as the head budget analyst. She also attended real estate school so that upon her retirement and the selling of their egg ranch, she started Abaroa Realty which she did for many years thereafter. She was an active and faithful member of the Church of Jesus Christ of Latter Day Saints, fulfilling many, many callings and assignments in all organizations, as the wife of the presiding leader of the San Diego Spanish Branch and served in the San Diego Temple. Her testimony was always strong and steadfast.In 1999, her beloved “Babe” (Ramon) passed away after years of health challenges. She lovingly and selflessly cared for him along with his brother, Fred, who also suffered similar health challenges. She loved to travel, especially cruising, and visited many many states and countries. She and her dear friend, Donna Nance, could sport purple hats like no other while on their journeys. Even with her own health challenges, she smiled, served and shared her heart with others.

She is survived by her children and her brother, George Rowley of San Diego CA.A Memorial Service will be held at 11 a.m. Saturday, July 17, 2021 at the Church of Jesus Christ of Latter Day Saints on 14439 E. Pecos Rd., Gilbert, AZ 85297. She will be interred in Greenwood Mortuary of San Diego. Arrangements in Arizona are conducted by Bunker Family Funeral and Cremations.  The Services can be viewed using this link: https://m.youtube.com/channel/UCQ2K_lfLgCYHSDr0OP166NA