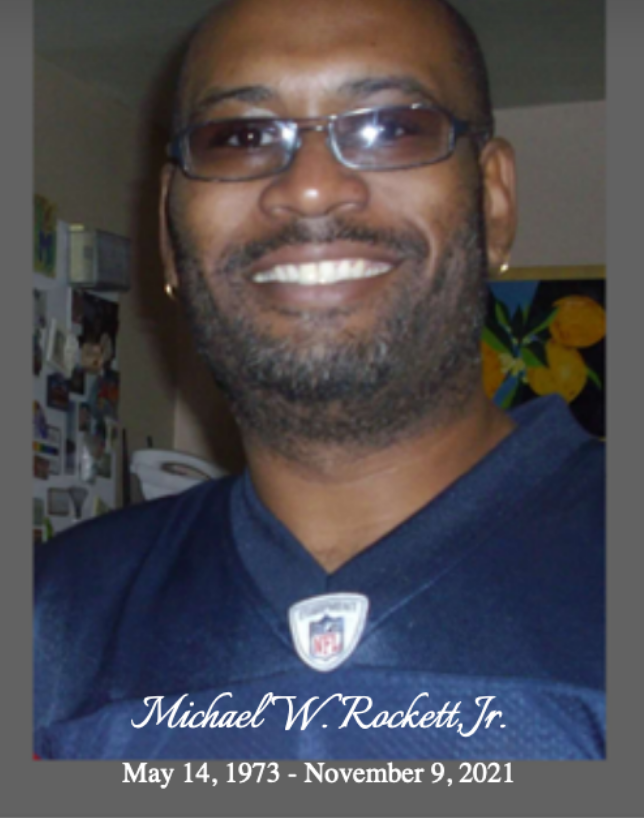 Michael Wayne Rockett, Jr., son, brother, husband, father, friend, was born in Normal, Illinois on May 14, 1973, the oldest of six children of Michael Wayne Rockett, Sr. and Denise Rockett (nee’ Stewart). In 1987, the Rockett family came to Chicago’s South Chicago neighborhood following opportunity. It was a return home for the parents, original West Siders. As mom would say, her babies needed to see more people that looked like them. So, she brought them home.

Arriving in Chicago, in the Reagan years, the Rockett family was six strong – soon to be eight. Every bit the blue-collar family, we made it work. Michael grew up in a loving household with his parents, younger sister, Darcel and younger brothers – Marshaun, Marshe’, Marcel and Markus.

Young Michael graduated from Parkside Elementary School and attended Hyde Park Career Academy, where he played football. He took his educational aspirations to MacMurray College in Jacksonville, Illinois on a football scholarship. Michael majored in computer science while there, but segued into healthcare most of his life, primarily working with at-risk populations, the elderly with dementia to youth with developmental disabilities. A trip to the West coast would anchor his career in healthcare. His children, Mykayla and Michael, and stepdaughter Melody Starnes, would soon make him a father. Michael moved back to Illinois with his new family in the early 2000s.

It was while Michael was in Walla Walla, Washington that he met the person who was soon to be his life partner, Kara Rockett (nee’ Kaser). The pair worked together while she was pursuing her a degree in nursing. Kara would eventually move away with said degree, but the ever-persistent Michael would seek her out several years later, when romance bloomed. Michael would take the leap to Arizona in 2008 to make a life with Kara. The duo was inseparable from then on; they married in 2018. For 14 years, the two shared their love and passion for fine beers, breweries, and adventure. Michael loved fashion, music, sports and the Miami Hurricanes, tattoos, new kicks, video games, comics, and pop culture. He loved life and those who lived it. It’s his example we try to follow: No regrets.

May the memory of Michael Wayne Rockett, Jr. bless us always.