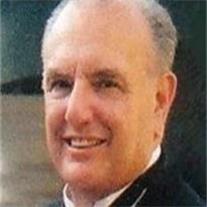 Michael Thomas Richards, age 68, born in Anderson, Indiana, on October 15th, 1944, passed away peacefully in his sleep at his home in Mesa, Arizona, on Tuesday, January 15th, 2013. He was a resident of Mesa for 45 years. He was a faithful Latter-Day Saint and served in many capacities within the church. He was preceded in death by his beloved wife of 50 years, Beverly Beatty Richards. He is survived by his brother, Tom Richards, his sister, Sharon Richards, and his 6 children: Mike (Kelly), Dave (Janet), Steve (Jolana), Renee (Larry), Gena (Doug) and Meredith (Jon). He had 21 grandchildren and 1 great grandson. A viewing will be held Monday, January 21st, 2013, at the Bunker University Chapel in Mesa, Arizona, from 6-8pm. Funeral services will be Tuesday, January 22nd, 2013, at 10am at the LDS Apache Junction Stake Center, 1720 North Ironwood Road. Internment will follow at the City of Mesa Cemetery.