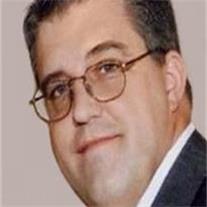 Cooper, Michael, 47, of Queen Creek, left this earth on Oct. 6, 2011 after a courageous battle with cancer. Born in Benson, Arizona, Mike grew up relishing history, patriotism and the outdoors. He spent his youth in San Manuel & graduated from Casa Grande Union High with honors & played varsity basketball. After serving a mission for the LDS church in Honduras, Mike graduated from BYU and Thunderbird with an MBA in International Management. An Administrative Manager for Univar for 20 years, Mike enjoyed many friendships at work as well as in his community in Glendale and Queen Creek where he raised his family. Mike touched many lives with his humility and kindness. He is preceded in death by his father, James Cooper and two brothers Darren and Sean Cooper. He is survived by his wife Rosie Cooper (Brown), his 5 children Alexis (20), Victoria (17), Christian (14), Nick (10) & Natalie (8), his mother Marilyn Cooper/Lunt, step-father Roger Lunt, sister Candy Galbraith (Manti), two nephews and a niece. His legacy was a love of family and devotion to God. He was a valiant man. A viewing will be held on Monday, Oct. 10th from 7-9 P.M. at Bunker’s Garden Chapel, 33 North Centennial Way, Mesa, AZ. The funeral services will be on Tuesday, Oct. 11th at 11:00 A.M. at the LDS church on 19413 S. Sossaman, Queen Creek, AZ. He will be buried at Valley of the Sun Cemetery in Chandler. In lieu of flowers, donations can be made for Mike’s children college fund at Chase Bank account number 000002962711939.