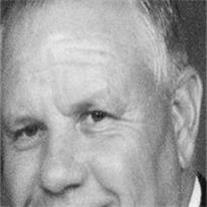 Mel Jones, age 84, passed away Monday August 2, 2010 at his home in Mesa. Mel was born February 3, 1926 to Willard Edwin and Edna Payne Jones. He served in the Army in Okinawa in WWII and served an LDS mission in the Southern States. Mel enjoyed 54 years of marriage to his wife Evalyn who died in 2004. He is survived by sons Les (Julene), Randy (Marie), Willie (Kim), Glen (Sylvia) and Ivan (Allison); daughter Brenda O’Connell; brothers, Leross and Maurice; 24 grandchildren and 16 great grandchildren. Mel served as President and board member for the Independent Contractors Association. He founded Mel Jones Masonry in 1962 and built homes primarily for the Farnsworth Communities throughout the East Valley. Mel served in many LDS church callings including Bishopric Counselor, Bishop, Multi-Region & Area Athletic Director for all Southwest Area LDS Church Sports Programs for nearly 25 years, Temple Worker, Family History Research and Youth Leadership. He served as volunteer for Sunshine Acres Boys Home and many community charities. Mel was a man of integrity; a devoted husband, father and grandfather. He spent his life in service to others and gave freely to all. Visitation will be held on Sunday, August 8, 2010 from 6pm to 8pm at Bunker’s Garden Chapel, 33 N. Centennial Way, Mesa, AZ. Funeral services will be Monday August 9, 2010 at 11am in the LDS Mesa North Stake Center 933 East Brown Road, Mesa, AZ (about 1/8 mile west of Stapley Rd) with visitation one hour prior to the service. Interment will be at the City of Mesa Cemetery, 1212 N. Center Street.