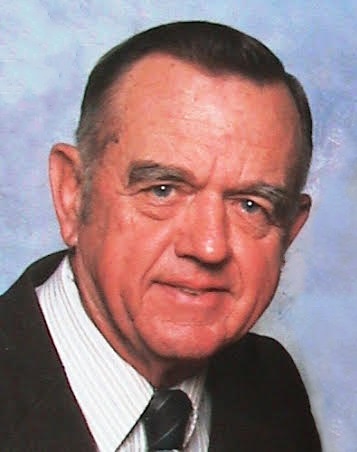 Max Eugene Perkins, 85, of Mesa, Arizona passed away peacefully on April 27, 2015 in Mesa, Arizona. He was born in Safford, AZ, to Reuben Eugene Perkins and Gertrude Margaret Reed on Oct 9, 1929. He had three siblings; Keith (Vella) Perkins, Carole Jean (Donald “Buzz”) Bond, and Melvin (Sharon) Perkins. His early years were spent in Mesa; his family moved to Duncan. In 1954 he fell in love with and married Patricia Taylor. He built their Mesa home where they raised their six children: Scott (Luda) Perkins, Reed (Rose) Perkins, Mark (Michelle) Perkins, Sue (James) Menlove, Ann (Steve) Towne, and Brad Perkins. Their ten grandchildren and 5 great-grandchildren brought him great joy.

Max and Pat built their home in Lakeside in 1979 and after he retired that was where they spent their summers. He didn’t retire to sit and watch TV. It was tennis six mornings a week, then hours every day creating beautiful gardens and every other improvement he could think up. It was their paradise, filled with flowers and fun, family and friends. It was where last summer they celebrated their 60th anniversary with a glorious party.

Max attended Gila Junior College (Eastern Arizona Jr. College) before serving in the Eastern Canadian mission, which he loved, for The Church of Jesus Christ of Latter-day Saints. He finished his studies at Arizona State College (later changed to ASU) and began a career as an educator, teaching in the Mesa public schools for 45 years. He loved teaching, particularly history and government.

A love for photography led him to a write a book on the subject, create new methods of film development for the home photographer, and invent photo equipment and accessories. He created many slide programs for the Mesa school district and for the city of Mesa and found creative ways to bring art into the classroom.

Max had a lifelong passion for tennis. Playing for Duncan High, he and his doubles partner won the state tennis championship in 1946.  He taught the sport to his children and others, enjoying the game (and still serving aces) into his 80’s.

He loved family history and began writing as a way for his family to visualize and remember the stories of their ancestors.  He worked with a team preparing and editing the Mesa “Our Town” book in the 1960’s, and provided many photos and the artwork for the inside cover of one edition.  His last years were filled with writing many books. The last volume, which he finished a few weeks before his death, was his personal history. His hope was that these stories will foster appreciation for the great men and women he admired, and serve as inspiration to future generations.

A funeral service to celebrate his life will be held Saturday, May 2 at 1:00 pm at the The Church of Jesus Christ of Latter-day Saints Solomon Ward building (the old 9th Ward) located at 977 E. Broadway, Mesa, AZ 85204.  A viewing will be held prior to the service, beginning at 11:30 am. Interment will be at the City of Mesa Cemetery. Arrangements by Bunker’s Garden Chapel.