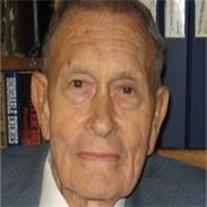 Max S. Blazzard, age 87, died April 7, 2012. He was born March 10, 1925, in Thatcher, Arizona. He and his wife, Mae, were sealed in the Mesa, Arizona temple and enjoyed 64 years together. Max and Mae are the parents of 5 children, 27 grandchildren and 33 great-grandchildren. Max served in World War II as a radio operator and was later employed by the Arizona Highway Department for 29 years. Upon retirement, he and his wife enjoyed traveling to 49 of the 50 states. A viewing will be held at 9 AM on April 14th, in the LDS Del Rio chapel in Tempe, AZ, followed by a funeral service at 10 AM. Burial will take place later that day at the Emery Cemetery. Funeral arrangements were handled by Bunker’s Garden Chapel.