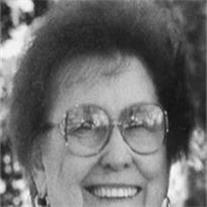 Mavis Leola Skinner, 83, passed away Saturday, July 31, 2010 at the home of her daughter, Paula Norby in Riverton, UT. She was born May 8, 1927 in Newry, SC to Simon Edward Phillips and Sarah Elizabeth Herbert. She was preceded in death by her parents, son Verlon F. Skinner and husband Arnold P. Skinner, two brothers Herphil and Horace Phillips. When she was about 12 years old her family moved west to settle in Fort Thomas, AZ. She graduated from Fort Thomas High School and worked various jobs. It was in the Gila valley she met then later married her sweetheart, Arnold Skinner in June of 1946. They were sealed in the Mesa, AZ temple a year later. They lived in Safford, AZ and while there Brent and Phillip were born. In 1952 they moved to Wilcox to begin farming and raising their family. Three more children were born, Paula, Verlon and Beth. In 1968 they moved back to Safford. A few years later Arnold, Mavis and their youngest daughter Beth moved to Buckeye, AZ. After Arnold’s retirement they moved to Mesa, AZ. Mavis was a faithful member of the Church of Jesus Christ of Latter-day Saints. She served in many callings throughout her life, including two years as a Church Service Missionary at the Family History Center in Mesa, then continuing with the extraction program in her ward and stake. She enjoyed serving in the temple. She was a talented seamstress and not only sewed for her family but for others in the community. She had a love for quilting crocheting and other handwork which she loved giving away and are now cherished by family and friends. In July of 2009 she moved to Riverton, UT to live with her daughter. She is survived by her children Brent (Helen), Phillip (Kayola), Paula (Scott) Norby, and Beth (Bill) Slawson. There are 24 grandchildren and 42 and counting great-grandchildren. She also leaves behind 3 sisters and 1 brother; Marie Knight, Nelson Phillips, Dora Reeves and Jessie (Delbert) Reed. Visitation is Friday, August 6, 2010 at Bunker’s Garden Chapel, 33 N. Centennial Way in Mesa and one hour before services. Funeral services are Saturday, August 7, 2010 at 12:00 noon at the LDS Meadowgreen Ward, 851 South 32nd Street in Mesa.