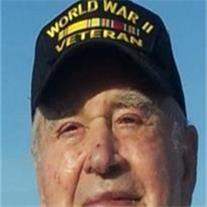 Maurice Chapman Ellsworth (94) of Carey, Idaho, passed away October 14, 2012, in Scottsdale at the home of his son and daughter-in-law, Greg and Tina Ellsworth. Maurice was born July 16, 1918 at Mesa, the first child of Louis B. Ellsworth and Lillian C. Ellsworth. He grew up in Mesa and as youth enjoyed teasing, running from and riding ostriches raised by his father and grandfather. He was an excellent student-athlete and the captain of the Mesa High School track team who starred in dashes and field events. He was also captain of Mesa High School’s football team that won the State and Southwest championships and was selected as an All-State halfback. He attended and played football at the University of Arizona then transferred to Arizona State Teachers College in Tempe and focused his athletic talents on track, winning the Border Conference championship in the 220 yard dash in 1941. He graduated with a degree in chemistry, and did chemistry graduate work before joining the Army during WWII. He was sent to officer candidate school and ultimately assigned to the 467th AAA AW Battalion SP. He was wounded after landing on Omaha Beach on D-Day, June 6, 1941. After several surgeries in England, he returned and ultimately became commanding officer of his anti-aircraft battery receiving battlefield promotions to the rank of Captain. He received a Purple Heart, European-African-Middle-Eastern Theater Ribbon with Five Bronze Stars and the Bronze Service Arrowhead for his service in the Normandy, Northern France, Ardennes, Rhineland and Central Europe Campaigns. After the War he opened a grocery store and was a partner in development of Skyline Drive Subdivision in Globe, Arizona. In 1947 he married Norma Owens of Show Low. They had their first three children, Maurice, Spence and Patti while in Globe. They moved to Midway, west of Casa Grande, in 1951. They opened a larger store, selling groceries and other merchandise, particularly sporting goods. They had two more children, Tim and Pam, in Casa Grande. Maurice and Norma and their children were sealed for time and eternity in the Mesa, Arizona LDS Temple in 1957. Maurice was a great father and loved to take his children and then his grandchildren hunting and fishing, which were favorite activities his entire life. He particularly enjoyed fishing trips in Mexico, and bird and big game hunting throughout Arizona and later in Idaho. In 1962, desiring to spend more time in the outdoors, Maurice, Norma and family moved to Hailey, Idaho, after purchasing the Silver Creek Ranch at Gannett and Craters of the Moon Ranch in Laidlaw Park. They raised cattle and grain and Maurice enjoyed hunting and fishing on and near his ranches. They had their final child, Greg, while living in Hailey. In the 1970’s they bought the Hot Springs Ranch near Carey, and built a home at Carey Lake using the hot spring for heat and culinary water. Maurice built ponds that he stocked with bass for fishing. He liked to walk out his front door to hunt ducks and geese and out his back door to fish for bass. He loved life on the Hot Springs Ranch. In 1986 Norma, the love of his life, passed away. For the rest of his life he continued to farm but his focus was more and more on his family. He was proud of and loved spending time with his children, grandchildren and great-grandchildren. He delighted in their accomplishments in Church, academics and athletics. He also began bottling and selling Craters of the Moon Geospring Water. He told all listeners about the trace minerals that made his water unique and related stories of customers from all over the United States who swore by its healing properties. He attributed his long life to drinking and bathing in the water. When he could no longer live alone, he moved back to his Arizona roots, living with Patti for a time then with Greg, Tina and their family. The last two and a half years he lived in the Arizona State Veterans Home. As his physical condition deteriorated, Maurice maintained a positive, kind and appreciative attitude. He thanked everyone who helped care for him. He was a great and honorable man, and a true gentleman his entire life. He is survived by his children, Maurice (Julie) of Boise, Idaho; Spence (Laurie) of Carey, Idaho and Scottsdale, Arizona; Patti Burke of Show Low, Arizona; Tim of Boise, Idaho; Pam of Carey, Idaho; and Greg (Tina) of Scottsdale, Arizona, along with 18 grandchildren and 20 great-grandchildren. He was preceded in death by his siblings Louis and Elaine. Maurice’s family extends special thanks to Greg and Tina and to Jerry and Pam Jones for their patience and kindness, to the staff of the Arizona State Veterans Home and the Staff at St. Joseph’s Hospital. In lieu of flowers Maurice’s family suggests contributions to the Romney for President Campaign, the Missionary Fund of the LDS Church or the Arizona State Veterans Home. Visitation is Friday, October 19, 2012 from 6-8 PM at Bunker’s University Chapel, 3529 E. University Dr. in Mesa. Funeral services are Saturday, Oct. 20, 2012 at 11 AM at the LDS Mesa South Stake, 2334 E. Pueblo, also in Mesa.