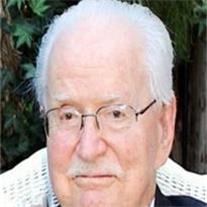 Mason McAllister Cottam, 96, long-time Mesa resident, died at Sunday, April 7, 2013, at Hospice of the Valley. He passed away peacefully, surrounded by family members. He was born Dec. 24, 1916, in St. George, UT, where his father was the sheriff. He graduated from Dixie College in St. George in 1937 and from Brigham Young University in 1940 and began teaching high school in Kanab, Utah. He earned his pilot’s license, and as World War II began, he went to California to work for Douglas Aircraft as an inspector. He married Laurel Brinkerhoff in 1942 in Las Vegas, and they later were sealed in the St. George Temple. After the war they moved to Fredonia, AZ, on the edge of the Kaibab Reservation, where Laurel worked as a secretary for Kaibab Lumber and Mason taught school and piloted private planes for Kaibab. The company often contracted their plane out to movie studios and Mason piloted their stars back and forth from Las Vegas to southern Utah where many Westerns were filmed in the ‘50s. During that time he studied and earned his master’s degree in education in 1954 – his thesis was on the issue of bilingual-bicultural education, long before the subject was fashionable. On the side, he and Laurel formed a dance band – Laurel on piano, Mason on bass – and played for events throughout southern Utah and northern Arizona. They moved to Mesa in 1957. Mason was a school guidance counselor in the winter, and each summer he worked as a crop-duster over Arizona’s cotton fields. He was dedicated to his church and most recently served as ward librarian for more than 25 years in the Mesa 30th Ward of the Church of Jesus Christ of Latter-day Saints. He is survived by a sister, Grace Dalton of Salt Lake City; his six children, 15 grandchildren and a great-grandchild. His sons and their spouses: John and Danna Cottam and Thomas and Carolyn Cottam of Mesa; James Christopher and Kristina Cottam of Maricopa; and Howard and Julie Cottam of Escondido, Calif. His daughters and their spouses: Mary and Tom Speropulos of Mesa and Linda and Clark Hoyt of Great Falls, Va. In addition to his wife, who died in 2006, he was preceded in death by a daughter-in-law, Debra Cottam. Visitation: Friday, April 12, 2013 from 6-8 p.m., Bunker’s Garden Chapel, 33 N. Centennial Way, Mesa. Services are Saturday, April 13, 2013 at 10 a.m., Mesa East Stake Center, 2228 E. Brown Rd., with visitation one hour prior. Burial at Green Acres Cemetery, Scottsdale. Memorial donations may be made to Hospice of the Valley.