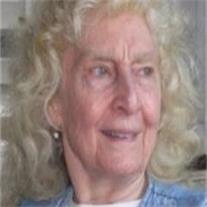 Mary Louise Perry Hoffman passed away peacefully, September 21st, 2012 in Mesa, AZ. Mary Louise was born December 28, 1921 in Lancaster, CA. She came home to Phoenix two weeks later. She grew up in Phoenix on Runyon St (now known as Mitchell) where at age 8 she met her future husband Bill Hoffman. She graduated from Phoenix Union High in 1941. Then went on to Stanford University in CA. She received her Masters in Physical Therapy. She married the love of her life in 1947 in Phoenix. She then practiced Physical Therapy at the Phoenix Indian School hospital until her first child was born. She and Bill then moved to Kansas were she taught anatomy and physiology classes at KU Medical School while Bill went to dental school. They returned to Phoenix. After Mary Louise’s second child was born she took up art. She has many oil paintings, and taught art for many years before she decided to write a book of her life story, Runyon Street, about growing up in Phoenix in the 20s.

She is survived by her brother, John Fairfield Perry, 2 daughters, Christine Wichert of Downey, CA, & Carol Pace of Mesa AZ. 12 grandchildren, 20 great grandchildren, and 4 great great grandchildren also survive her. She was a wife, mother, teacher, artist, author, and art teacher. Mary Louise’s husband of 63 years, Bill, preceded her in death October 3rd, 2010. She will be truly missed by her family and many friends. Her loving spirit will remain in our hearts forever. Arrangements entrusted to Bunkers University Chapel, 3529 E. University Dr. Mesa, AZ 85213. Services will be held at Church of Jesus Christ of Latter-day Saints 3345 E. McLellan, Mesa, AZ 85213 on Friday September 28 at 10:00 AM