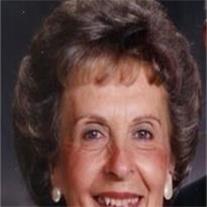 Mary Diane Blackham Shumway, passed away on October 15, 2012 at the age of 82. She was born in Ogden, Utah on October 29, 1929 to the late Samuel and Grace Blackham. Diane attended Manhasset High School in New York for two years before moving to Provo, Utah and graduating from BY High School. She then attended BYU and was a member of the BYU Cougarette Team and the O.S. Travata Social Unit. On August 11, 1950 she married her eternal companion, Widtsoe Shumway, in the Salt Lake Temple. She was an active member of the LDS church and served in many capacities alongside her husband, Widtsoe, where they presided over the Utah North/Ogden Mission and the Arizona Temple. Diane tended to the sick, the weary, the lonely, and the aged. She left a legacy of service, compassion and good works to her descendants. Diane is survived by her 4 children, Mary Lynn (Jerry) Garns, David (Loreen), Jon, Sterling (Valerie), 24 grandchildren, 31 great-grandchildren, and 2 sisters Gloria Smith and Louise Mondragon. Funeral services will be held Saturday, October 20, 2012, at the Crystal Shores LDS Ward at 1005 N. Voyager Dr. Gilbert AZ, with visitation from 3:00-4:00 pm and services beginning at 4:oo pm. Entombment will take place on Monday, October 22, 2012 at Memory Lawn Cemetery in Phoenix, AZ. Funeral Arrangements are being handled by Bunkers Garden Chapel, 480-696-6883.