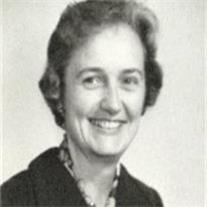 Martha Elizabeth Sprenger Sauer, 88, of 2089 Leisure World, Mesa, Arizona, died peacefully in her sleep November 26, 2011. A memorial service will be held 2:00 pm, Tuesday, December 6 at Hosanna Lutheran Church, 9601 Brown Road, Mesa, AZ 85207. Martha was born October 27, 1923 in Schenectady, NY two days before her future husband George M. Sauer, Jr., also of Schenectady. Their relationship began in the fourth grade, and they were married 2 weeks after George returned from the Pacific in 1946. Martha graduated from Albany State Teacher’s College with majors in English and Music. She taught English in Long Island and Scotia, NY. When the family moved to Cleveland, OH, she taught Sophomore English at Lutheran High School East from 1968 to 1980, where she published the yearbook and the newspaper, and directed 12 drama and musical productions. She was a consummate educator, using her skills and love of God, nature and the arts to teach Sunday School, lead a Girl Scout troop, work as archivist for the Cleveland Play House Theater, research and publish histories and genealogies of her extended family branches, and many other activities with and for others. For many years her family hosted foreign exchange social workers as they studied American culture and social work. These guests soon became part of the family and life-long friends. Martha’s loves were her family, her church, bird watching, canoeing, camping, riding on the back of George’s Honda (especially going fast), all of nature and its Creator. She was curious, determined and always strove for excellence. Martha is predeceased by her daughter Ellen B. Corbin. She leaves behind her husband of 65 year, George, her daughters Amy (Joe) Helewa of San Diego, CA, Cynthia (Barry Blakeslee) Klenz of Cleveland, OH, and Nancy (Dave) Eberling of Chicago, IL. Martha and George have 11 grandchildren and 5 great-grandchildren. Burial will be at the convenience of the family in Albany, NY. Donations may be made to: Adirondack Chapter of The Nature Conservancy, Barnett Center for Conservation, PO Box 65, 8 Nature Way, Keene Valley, NY 12943 or Hospice of the Valley, www.hov.org. Arrangements by Bunker’s Garden Chapel.