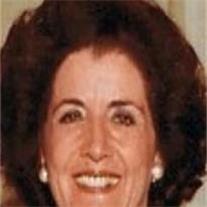 85, of Mesa, Arizona passed away on September 21, 2012. She was born in Pima Arizona in 1926 and spent her childhood there. She left for college at 17, attended Brigham Young University and graduated from Arizona State Teacher’s College (ASU), beginning her teaching career at Balsz Elementary School in Phoenix.

She met Henry Smith, a native of Snowflake Arizona, married in 1952, and began her family life with his three boys, Richard, Karl and Raymond Smith, the first two of whom had been children of his first wife’s previous marriage. To that already blended family she added three more boys, Kim, Scott (who died as a baby) and Frederick Smith. Shortly after the loss of Scott, her husband Henry died as well, leaving her with 5 boys and a nascent commercial real estate business.

Alone, and with 5 boys to care for, she took over her husband’s business and provided for her family. As might be expected with a family of 5 boys, she kept the local pediatrician, Dr. Fred Ewart, in good business. Eventually, with a promise from Dr. Ewart to actively help in raising her family in the Mormon Church, which was such a large part of and support to her life, in 1959 she married him and subsequently added one child to the family, Gregg Ewart.

In 1963, she and her husband moved into the home they had designed together in Mesa, in which she spent the rest of her life serving in her church as Young Women’s President and Relief Society President and engaged in what was clearly her most important work, raising her family and forming, of these boys of so many different parents, a band of brothers.

In 1994, she and Dr. Ewart were called to serve an 18-month mission for the Church of Jesus Christ of Latter Day Saints at the San Diego Family History Center.

She is survived by her sons Richard (Heidi) Smith, Karl (Wendy) Smith, Raymond (Vickie) Smith, Kim (Julie) Smith, Frederick (Catherine) Smith and Gregg (Justin Horlyk) Ewart, 21 grandchildren and 28 great-grandchildren. Viewings will be held at Bunker Family Funeral Home, 33 N. Centennial Way in Mesa on Tuesday September 25th from 6:00-8:00 p.m. and at 8:30 a.m. on Wednesday September 26th at the Mesa Central Stake Center of the Church of Jesus Christ of Latter Saints, 925 N. Harris. The funeral service will follow at 10:00 a.m.