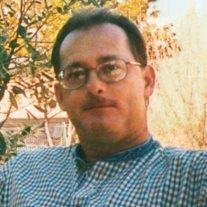 Mark E. Botkin, 55, of Mesa Arizona, passed away June 22nd. He is survived by his two daughters Lt. Col. Malina Dubbs (SFC. Jason Dubbs); and Amanda Steward (Brad Steward); his mother, Nora Painter, his siblings Tawanna Blakely; Ret. MSgt Clay and Teri Botkin; and Scott Botkin, , and most importantly his two granddaughters Alexis Dubbs and Katie Dubbs. He honorable served his country for over 20 years in the Air National Guard; retiring with distinction as a Senior Master Sargent. Mark will be remembered for the love he shared with his family, who were also his friends, and his friends, who became part of his family. We send Mark off on the eternal bus ride with a Memorial Service at Bunker University Chapel, 3529 E University Dr., Mesa, AZ, on Friday June, 27 2014 at 2pm. In lieu of flowers donations to a charity you feel deserving would be appreciated.