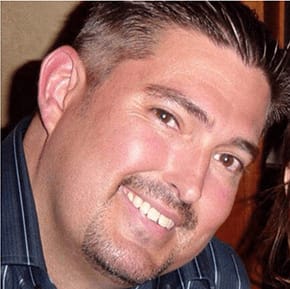 Mark Arlo Davidson, passed away, peacefully in his sleep, from Congestive Heart Failure at his home in Gilbert, Arizona on March 26, 2017, at the age of 44. He was born in Provo, Utah on November 12, 1972 to J. Stephen and Judith Davidson and was the third out of eight children. When Mark was a baby the family moved to San Diego, then Fairfield, and finally settled down in Vacaville, CA in 1975 where they stayed until the children were grown. Mark graduated from Vacaville High School in 1990 and soon after served a mission for the Church of Jesus Christ of Latter Day Saints In San Antonio, Texas (Spanish Speaking) from 1991-1993. As a lifelong active member of The Church of Jesus Christ of Latter Day Saints, Mark willingly served as a volunteer in many different capacities, including countless years in the church choir , ward mission leader and as a Sunday school teacher. His faith was strong and his heart was big. If there is one word that best describes him it is : Passionate. From a young age, one of Mark’s greatest passions was music. Starting at the age of 11 through age 18, Mark sang baritone then later bass, in his family barbershop quartet (The Davidson Forever Family), with his dad and two sisters, Wendy and Lisa. They performed opening day at Marine World Africa U.S.A. (now Six Flags Discovery Kingdom) in Vallejo, California and continued performing there for seven years. He continued this singing tradition, started by his father, by singing bass in many different barbershop quartets and choruses throughout his life in the different places he has lived.

Mark married “The Love of his life” Bridget Ann King, on January 11, 1997 in the Portland, Oregon LDS temple. He and Bridget welcomed three beautiful children into their lives in October 2008: Monique (11), Marcus (9), and Michael (8), and anxiously anticipated when they would permanently become a part of their family. Soon after, their family was complete with the birth of Darrigan in November of 2009. The three oldest children were officially adopted in November of 2010 and then the pinnacle came when they were sealed together forever as a family in the Sacramento LDS temple in February 2011. His family was his EVERYTHING!!!

Mark had a love of driving and made it his career of choice. The majority of his career was spent driving for Brinks Armoured Trucks. He also enjoyed driving limousines and for Uber. The last few years of his life, he became extremely passionate about the dangers of texting and driving. He founded and was CEO of the non-profit organization, DRIVE CELL FREE, and spent much of his time traveling and educating others on the risks of distracted driving.

Life changed drastically for Mark and his family, when he was diagnosed with familial Cardiomyopathy in November of 2014. He soon was unable to work and his quality of life deteriorated progressively until it was recommended that he get evaluated for a heart transplant. Unfortunately, due to health insurance issues, he was unable to receive a heart transplant in time.

In lieu of flowers donations can be made to: