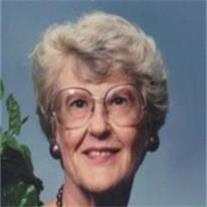 Marjorie Knell Robinson, beloved wife of Alex and mother, grandmother and great-grandmother passed away peacefully in Mesa Friday morning December 7, 2012 after a long bout with Parkinsons Disease. She was born July 16, 1927 in Cedar City, Utah, the daughter of Rulon and Esther Knell. Marjorie married Alex Findlay Robinson in the St. George Temple July 5, 1945.

Mom was a lifelong member of the Church of Jesus Christ of Latter-day Saints and served in many positions and responsibilities. Her greatest love was her family both present and past and she spent many hours going to the temple and encouraging her family to do the same. She became filled with the Spirit of Elijah as she worked with her family’s genealogy and discovered sweet connections between her family and many others. She loved being surrounded by her family and listening to their stories as well as telling her own. Mom’s homemade cinnamon rolls and pies and homemade turkey noodle soup have become the standard by which her daughters and daughter-in-laws have sought.