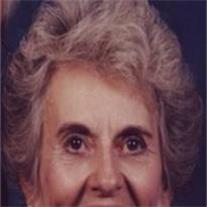 Marjorie Alice Gunnell, a resident of Gilbert and Mesa, AZ for 29 years, passed away on April 29, 2012 at the age of 87 at home in Mesa. Marjorie was born in Everett, Washington on September 26, 1924 to Florence Alverson and Lloyd Winchester. She attended school in Everett and the University of Oregon. She was one of the first women to work in the Civil Aeronautics Administration as a communicator and was working for the CAA when she was transferred to Idaho where she met her husband, Roy Gunnell. He preceded her in death in 2006. She is survived by three children: Marcia G. Madsen, Darla J. Klovski, and W. Steven Gunnell, as well as 5 grandsons. Marjorie is revered by her children for her faith, strength of character, unfailing kindness, and dedication to her family. She studied, played, and taught piano and organ from a young age, serving as an organist in virtually every LDS ward in which she was a member, as well as in the Mesa Temple. Marjorie, Roy and their family lived for many years in Bountiful, Utah where Marjorie began teaching in 1966. After moving to Gilbert, she was an officer of the East Valley Music Teachers Association, including serving as President. Teaching young people was her passion. She received the Honored Teacher Award from the Arizona State Music Teachers Association. Marjorie completed her BA in music in1995 at ASU at age 70 and continued teaching thereafter. Visitation will be Sunday, May 6, 2012 from 6-8 PM at Bunker’s Garden Chapel, 33 N. Centennial Way, Mesa. Funeral services are Monday, May 7, 2012 at 10 AM, preceded by a visitation at 9 AM at the Gilbert Lindsay Chapel, 1150 N. Lindsay Rd., (Lindsay and Houston), Gilbert. Interment will follow at Green Acres Cemetery in Scottsdale. In lieu of flowers, donations may be made to the Central Arizona American Guild of Organists – Marjorie Gunnell Scholarships at Box 60701, Phoenix, AZ 85082-0701.