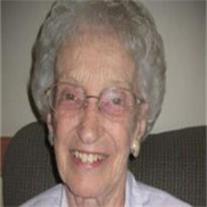 Marian Helen Cox Harris, 90 was a traveler who had visited 40 countries and all 50 states. On April 28, 2009 she traveled back home. Marian was born in Waverly, Washington on November 16, 1918. She left home the day after high school, an independent, determined young woman. She worked hard and was a lifetime learner, starting with a Bachelor’s degree in Home Economics. She served her country as a WAC in the Armed Forces and was a proud and patriotic citizen. She gave back to her community, volunteering thousands of hours, most recently at the Arizona Museum for Youth. Marian was a friend to many and will be greatly missed. She was preceded in death by her husband, Russell Harris, sisters, Ethel and Elsie and a brother, Ralph Cox. Funeral services will be Monday, May 4, 2009 at 11:00 AM preceded by a visitation at 9:00 AM, both at Bunker’s Garden Chapel 33 N. Centennial Way in Mesa.