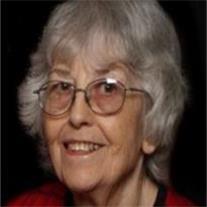 Marilyn Jean Eaton, 81, passed away peacefully May 14, 2013 in Phoenix, Arizona. Jean was born on July 11, 1931 to Clyde and Wilma Kemper in Julesburg, Colorado, where she spent her youth, graduating from Sedgwick County High School where she was prom queen and valedictorian of her class. She lived in Oshkosh, Nebraska after she married her high school sweetheart, the late Robert Marlatt, in 1950. They moved to Mesa, Arizona in 1959. She earned her AA degree as a library technician from MCC in 1973. She had a very happy, active life, filled with family, friends, and church. As an active member of First Christian Church of Mesa (Disciples of Christ) for over 54 years, she taught Sunday school, participated in Christian Women’s Fellowship, and served as a deaconess and Elder. Active in other organizations such as Church Women United, the Music Guild, Mesa Fine Arts, and Meals on Wheels, Jean also volunteered over 5000 hours for Mesa Lutheran Hospital, and was involved in the auxiliary. She was a member and past president of PEO Chapter Z. Jean was able to travel extensively with her second husband, the late William “Bill