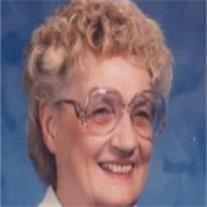 Marie Frances Nasch, of Tempe, AZ, took the hand of The Lord March 1, 2011, at age 84. Born on February 28, 1927, in St. Paul, Minnesota, she was the tenth of twelve children, born to William and Helen Lancette. Marie married Lt. Ralph L. Nasch, then a World War II bomber pilot, on December 18, 1944. Following 20 years of service in the USAF, the couple moved from Ramstein AFB, Germany, to retire permanently in Tempe, Arizona, where now, Lt. Colonel Nasch, joined the Arizona Department of Transportation, while Marie began her long awaited dream of becoming a teacher. She enrolled as a freshman at Mesa Community College at age 40, graduating with honors, followed by attainment of a B.A. and a Master’s Degree in Education, both with honors, followed by an Administrative Degree in Education, from Nova University. She subsequently taught elementary school, followed by Junior High English and Literature for the Mesa Schools, retiring after 16 years of classroom teaching, and ten years of volunteer service to the school district. Marie, along with the entire family, were always active with Scouting, church, community, Little League, and extracurricular school activities, besides her love of gardening, writing poetry, collecting blue glass artifacts, and traveling with other retirees. Ralph and Marie were joyfully blessed with four children; Craig (Delyte) of Camp Verde; Gary (Terri) of Prescott Valley; Johanna Marie Decker (Curt) of Glendale and Glenn (Patty) of Spokane and their grandchildren, Jacob, Janelle, Brooke, Casey, Lynsey, Brett and Kennedy. Memorial Services will be held at Bunker’s Garden Chapel, 33 North Centennial Way, Mesa Arizona on March 5, 2011 at 3 PM. Interment will follow at the City of Mesa Cemetery, 1212 N. Center St., Mesa, AZ. Following Marie’s request floral gifts will be distributed to nursing homes and hospital, and monetary gifts will be given to the Child Crisis Centers of Mesa. Come say good-bye. She would love to see your smiles, and no tears.