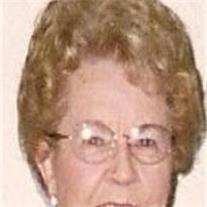 Born in Glasgow, Montana Marian moved with her family to the Flathead Valley at the age of thirteen and attended high school in Bigfork, Montana. She completed beauty school and worked as a hairdresser for nearly 40 years. Marian married Ed Falkner in 1946 and together they raised four children until his death in 1962. She was married to Walter Larson in 1969 and lived in Great Falls, Montana until their retirement at which time they moved to their home in Leisure World, Mesa, Arizona. Marian was extremely active in the Kiwanis Club and her many hobbies which included china painting, high teas and intimate dinner parties. She was preceded in death by her daughter Marilyn Smith and her son Charles Falkner. Marian is survived by her husband Walter, son Douglas Falkner (Veronica), daughter Kathleen Colman (Richard); grandchildren Randy Smith (fiancée Kendra), J.T. Falkner (Pamela), Patrick Falkner, Jody Pavich and Katie Worthen; great-grandchildren Castin Kendall and Kora Leigh Kendall. A Memorial Service will be held at 11:00a.m., Tuesday, 23 March 2010, at the Apache Wells Community Church. In lieu of flowers Marian had requested donations to the “Kiwanis Club of the Superstitions Donation