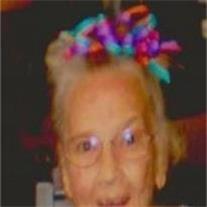 Schnorr, Margaret passed away Aug. 5, 2012, in Mesa, AZ, after being sick for a short time. She was born March 22, 1924 to Lula and Pink Swaim in Oklahoma; she moved to Phoenix when she was fourteen years old. Margaret was part Choctaw Indian and was very proud of this fact. She met Albert Schnorr at a USO dance and started dating him after World War II, when he asked if he could walk her home from the dance. Albert served in the Navy in the Philippines during the war. They married in 1947 and had three children, Russell, Timothy and Christine. Margaret was preceded in death by her husband Albert and her son Timothy. She is survived by her son Russell (Geri) Schnorr and her daughter Christine (Jim) Bucalo, six grandchildren, Anthony, Nina and Tom, Russell’s children, Zebulan, Jacey and Jenna, Timothy’s children and five great-grandchildren. She was a wonderful wife, mother, grandmother and great-grandmother. A Memorial Service will be held on Thursday, Aug 9th at 11:00a.m., at Bunker’s University Chapel, 3529 E. University Dr., Mesa, AZ